In her newest project Irena Tomažin once again uses the medium of voice and body as her tool(s) to tackle the themes of tradition, heritage and the status of voice(s) and images, which voice as a medium of oral tradition is carrying on, from one generation to the next.

“In a way, we belong more to the past and to the tradition that - at first glance - seems to have faded away already; it also seems that we don't belong to the present as much, the present that is supposed to be "the here and now." But maybe the oral tradition that seems to have faded away with time, is only a display of its quiet, unobtrusive and ever-continuing presence. The voices, with which we speak, are the melodies of past orators. The present on the other hand – with its ubiquitous sounds – inscribes itself onto a body as a set of very different voices, with which we delineate the voices that are only to become (our) future oral traditions. Maybe this paradoxical time-loop can sometimes be caught in the duration of the voice within a single exhalation.”

In the first part of the process (2011), Irena Tomažin, Sabina Đogić and Andrej Kocan filmed five encounters with selected interpretors / authors and performers of folk music: Ljoba Jenče, Hermana Bogdan and Boštjan Narat (Slovenia), Natalka Polovynka (Ukraine) and Svetlana Spajić (Serbia). Their footage is now abundantly rich and inspirational material from which the author will derive further processes of creating the final performance.

it happens sometimes, that the sheer beauty of a song tends to bring me into a certain state of confusion… as if hot air is inflating inside of me ... the air, which growls inside my chest, choking me, until I explode, and then get expelled, way out there, into the silence. and sometimes I manage to shriek, really quietly. very quietly and only very briefly ... (Irena Tomažin)

The titles of Irena Tomažin's projects have become one of her hallmarks. Word play and descriptive paradoxes are not mere introductory attention grabbers, but actually announce (and later on confirm) the performer's perceptiveness and specificity of her expression. The latest from her series of performances and music stagings, The Taste of Silence Always Resonates expands and deepens Tomažin's new vocal direction, at the same time undertaking an ever more thorough and masterly investigation of her vocal concerns. The multiple dimensions of her creativity are now intertwined in the layers of concrete and abstract vocal area; between words and sounds, between folk songs and a made-up language, between orderly melody and its total annihilation. But, what makes both sides increasingly refined is a non-aggressive remark suggesting that both poles are understood and perceived in an overly superficial way, that we don't take enough interest in them. Whether this is (seemingly tangible) folk tradition or the unknown (metaphysical) resonations of the human voice, the performer moulds them into an atmosphere of the exotic and the enigmatic with her – at least for our space – unique creative approach. Her vocal capacity is enormous; accordingly, the set of the performance is framed in a rather basic manner and material emptiness at a certain point seems to become the only possible decision: the performer's elaborate suggestibility of vocal nuances manages to gradually restructure the “invisible” sound form into a depiction of a seeming figure, prop, space and even time. In collaboration with the dramaturge Barbara Korun and sound designer Aldo Ivančič, Tomažin devises the imaginary “landscapes of the voice” as a collage, rather unloaded of a rational succession of events and focusing more on oppositions and semantic spans, offered by dissected vocal variations. If experimenting with folk tradition melodies, parodying the melodic humour of a foreign (Finnish) language, and on-the-spot creation of sounds made by a pack of dogs as a backdrop make an effect through collective codes, certain scenes, on the other hand, almost entirely withdraw from straightforward grasping. In those moments, the voice supersedes and disregards its common cultural function, it steps out of the performer, separates from her body, and vibrates along the invisible lines to travel through the space. It bounces off different surfaces in the space, thereby, together with the sound, also changing its imaginary form. The moments of unarticulated throat singing or the distorted, broken melodies, reminiscent of primordial rawness and vulgarity, evoke feelings of something unbearable; and because of this mysterious, unknown sound nature, they conjure up a state of alarm and anxiety. The voice as a silent alter ego, as a foreign object in one's own body, or a pure, independent physical substance is at its sharpest precisely in the witty and at once eerie “lip choreography”, and when the acousmatic sound steps in. As a matter of fact, it is quite incredible how the performer's total surrendering and presence in places efface her physical image to manifest her voice in its absoluteness.
10.12.2012, Delo, Tangible invisibility of the voice, Zala Dobovšek

...Because of her specific approach, Irena Tomažin is considered an extremely significant author in the Slovene space. Having a strong dance background, Tomažin later on started to work with the voice. Her performances are interesting basically because she works on voice as if it were dance, that is with choreographic principles, because she understands voice as movement of the body. Consequently, her performances should not be seen as vocal experiments or music performance art, but as performances with a lot of choreographic experimentation. This approach can be detected also in the present performance, which is actually a kind of a concert of Slovene folk motifs, songs. Each scene has a certain choreographic capacity in the way the body negotiates the voice and the voice negotiates the body. Irena tackles this relation in a very interesting way, through certain asceticism that allows her to focus attention on the subject of her interest. It was interesting to observe in The Taste of Silence Always Resonates how the set design was positioned, how the piece was dramaturgically structured; her decisions were very clear, there was a lot of reduction to essentials, which has a very strong affect on the viewer as she can concentrate on what the performer does with her body and so on. The Taste of Silence Always Resonates is structured so fluently that it does not lead to spectacle or empty form; on the contrary, the clear decision for asceticism is its lining in the dramaturgical sense as well. ...
03.03.2015, RTV SLO, ARS, 7. Gibanica, bienale slovenske sodobne plesne umetnosti, Petra Tanko in dialogue with Bojana Kunst and Sabina Potočki 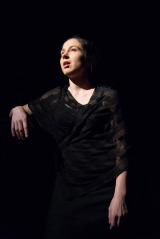 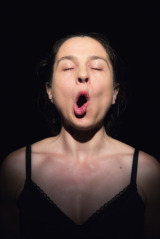 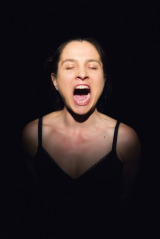 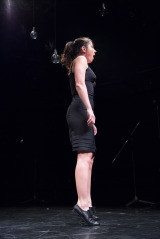 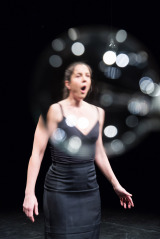 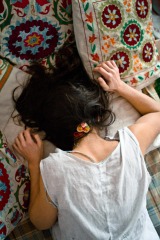 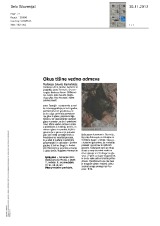 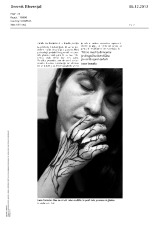 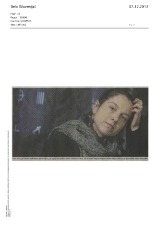 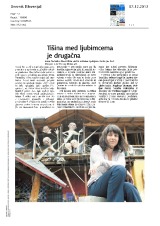 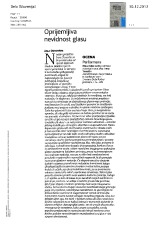 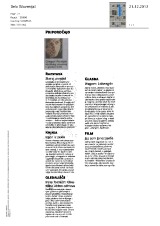 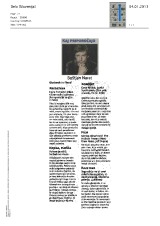 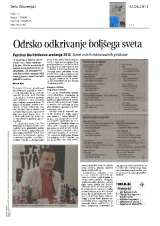 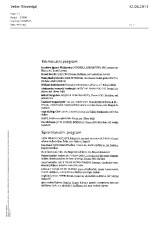 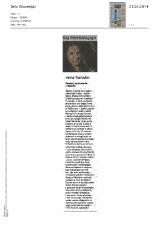 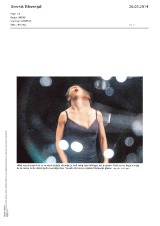 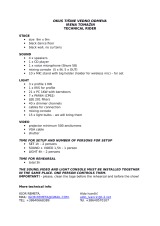