This is the fortune of manhood.
Images and image.
Burning the calm fever of love.
I press the button.
He feels.
Fainting upon the obstacle of touching.
Nothing I care remains.
He took the silence.
I took the devotion of a staring fantasy.
I’ve made a comedy of becoming a man next to an animal.

Ferlin’s first solo piece Sad Sam Revisited goes back to the final year of his studies in Amsterdam. Although the performance was shown only twice on Slovenian stages, it triggered a number of resounding critical (and theoretical) responses. Marina Gržinić, for example, wrote that the performance is “almost an ontology of dance” and Ferlin a “pure terrorist (of the Deleuzian type), who has decided to eliminate the too many returns of all there is in the theatre of contemporary dance and opted for difference in its purest form, which is life.” Sad Sam Revisited encapsulates the procedures of contemporary theatre and dance with unexpected maturity and boldly sets out to face the demanding performative non-acts of duration, of persisting in forming a state, albeit never wavering to interrupt the narrative. The palette of Ferlin’s performing corpus in Sad Sam Revisited already incorporates recognisable sequences of the physical procedures he commonly uses, as well as the skilful shifting between humour and dryness, which performatively plays with the poetic fragments by Katalina Mella in the field of contemporary dance (and theatre).

The performance is part of the Sad Sam Manifestation festival co-produced by Cankarjev dom and Emanat Institute.

Matija Ferlin is a Croatian theatre director, ensemble dance piece choreographer and performer of his own one-man shows. Graduated from the School for New Dance Development in Amsterdam and subsequently lived and worked in Berlin and Toronto. After returning to his hometown Pula, where he was born in 1982, he focused on researching and rearticulating different concepts of stage performance, collaborating both with actors and dancers. 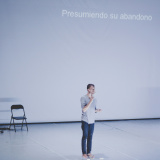