06.10.2013
Guillermo Gómez-Peña, Dani d'Emilia and Erica Mott will share their performance methodology, an eclectic combination of exercises sampled from various traditions as well as theoretically analys of the creative process and the issues addressed by the work, its aesthetic currency, cultural impact and political pertinence.

We especially invite performing artists, dancers, students, musicians, poets, designers, visual artists and others who are interested in human body and its potentials.

During the time of workshop, two parallel processes take place:  for 5–8 hours a day, participants are exposed to La Pocha’s performance methodology, an eclectic combination of exercises sampled from various traditions (experimental theatre and dance, Suzuki, ritual performance, shamanism, etc.). Parallel to this hands-on process, the group theoretically analyses the creative process, the issues addressed by the work, its aesthetic currency, cultural impact and political pertinence.

If conditions allow, at the end of the process there can be a public performance open to the local community.

La Pocha Nostra is an interdisciplinary arts organization based in San Francisco with branches in Central and South America, Europe, Asia and the South Pacific. La Pocha Nostra was founded in 1993 by Guillermo Gomez-Peña, Roberto Sifuentes and Nola Mariano in Los Angeles. The goal was to formalize conceptually Gomez- Peña’s collaborations with other performance artists. Core members of La Pocha include Guillermo Gomez- Peña, Roberto Sifuentes, Violeta Luna, Michelle Ceballos, Dani d’Emilia, Erica Mott and over 30 associates worldwide. Our projects range from performance solos and duets to large scale multi-sensory performance installations involving photo, video, sound and projection. If there is a common denominator, it is our desire to cross and erase dangerous borders including those between art and politics, art practice and theory, artist and spectator – ultimately to dissolve borders and myths of purity whether they be specific to culture, ethnicity, gender or language.

Guillermo Gómez-Peña is a performance artist, writer, activist, radical pedagogue and director of the performance troupe La Pocha Nostra. Born in Mexico City, he moved to the US in 1978. His performance work and 10 books have contributed to the debates on cultural diversity, border culture and US-Mexico relations. His art work has been presented at over eight hundred venues across the US, Canada, Latin America, Europe, Russia, South Africa and Australia. A MacArthur Fellow, Bessie and American Book Award winner, he is a regular contributor for newspapers and magazines in the US, Mexico, and Europe and a contributing editor to The Drama Review (NYU-MIT). Gómez-Peña is a Senior Fellow in the Hemispheric Institute of Performance and Politics, a Patron for the London-based Live Art Development Agency and in 2012 he was named a Samuel Hoi Fellow by USA Artists.

Dani d'Emilia is a roaming Italo-Brazilian performer working in various cross-border performance, theatre and live art projects. Using the potential of performance as 'encounter', her work tends to manipulate, activate and connect different facets of how we perceive the culturally implicated body, exploring its physical and conceptual distortions. Throughout the years Dani has obtained training in several physical practices and performance methodologies including Mime & Physical Theatre at the Desmond Jones School and Theatre & Visual Arts Practices at Dartington College of Arts (UK). Dani is a co-founder of the London based Immersive Theatre Company Living Structures and a core member of La Pocha Nostra. She has presented her work in various cities across Europe, Latin America and USA.

You are kindly asked to send us not later than by October 1st 2011 a statement of purpose, a brief biography, contact info (email and telephone number) and a sample of your work to contact@cityofwomen.org.

Participation is limited in number and free of charge. An application is mandatory.

Due to a limited participation we reserve the right to selection of the workshop participants. All applicants will be informed on the selection results selection by email until Thursday, October 3rd. For additional information please contact +386 (0)41 584 804 (Barbara Zonta). 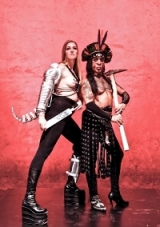