Kaja Lorenci: Just in appearance sometimes as everyone else

In her performance Just in Appearance Sometimes as Everyone Else, Kaja Lorenci multiplies the form of the duet with different dance tasks and configurations, delimiting it by two choreographic contrasts: the solo as the dancer’s monologue, which is a kind of a precondition for establishing communication with the other, and the group choreographic configuration, in which the duets enter their indistinguishable multiplicity. The duets can be read along the lines of the dynamic of individual self-awareness, as a site of encounter, trust, insecurity, as well as (self)loss or burden. Lorenci moves on the boundary where choreography may cross over to the field of different narratives, with dancers obtaining certain characteristic traits; however, her choreographic configurations are nevertheless primarily concerned with staying within the field of choreographic problems. Her work can therefore be understood as a distinct procedure of detheatralisation, with which choreography is never exclusively and fully a formal proposition, while at the same time all chances for the slightest hint of drama are being renounced as well. Maybe we could even say that the theatrical engine of Kaja Lorenci’s work generates choreographic constellations that become semantically adhesive insofar as they are uncompromising in renouncing their potential theatralisation. Encounters of five dancers are contingent upon a certain abandonment of defences and self-protections inhabiting our modern bodies. There is no mysticism here whatsoever, only materiality in the widest possible sense. (Rok Vevar)

Instead of closing, pinning down the meanings, this performance is intentionally opening them up. The effort of performers, all outstanding movers and experienced improvisers – besides the author also Katja Legin, who was really in her element on premiere night, Nataša Živkovič, Dejan Srhoj, and the young Žigan Krajnčan, is aimed at finding ways to establish, through situations of an encounter, a certain presence that would remain as ordinary, quotidian, unperformed, spontaneous as possible in an artificial setting such as the stage, but is at the same time formalised enough not to sink into the privacy of “actual relationships” between performers. We could push this thought a little bit further and say that they have been looking for what the French philosopher Gilles Deleuze called “singularities”. Namely, points of tension and potentiality within matter, or something that is absolutely unique to a thing. In other words, we are not dealing with individualities, subjectivities, be them “performing” or “theatrical”, nor with worked out, self-consistent characters. Singularities are, on the contrary, rather universal categories, insofar as having the body is universal to humans even though we inhabit our individual bodies in our own specific ways and differently in different contexts. Singularities namely exist only in encounters and in plays of forces. And it is precisely encounters and games that are the main motifs of Kaja Lorenci’s performance.
07.10.2016, Dnevnik, Choreographical key to everyday life, Pia Brezavšček

How does the body speak?
(...) By making conscious the manifold principles of movement communication, the performance focuses on a movement exploration of encounters and relations, but without fixation on a specific notion (image, character, or story). Insisting on the task at hand, the performers have been successful at arriving at movement that is quite everyday-like – they have stripped away its potential layers of aesthetisation and decoration all the way to the “pure” materiality of movement language, which has allowed the body to speak out in its kinetic language. Dance is deconstructed in a kind of an elementary movement language alphabet which is at the same time fresh as well as universal. And this consequently transcends the potential danger of the performance to get carried away in the self-concerned field of “pure dance” or “pure choreography”, even more so because it is structured on well-defined dance and choreographic tasks of constituting movement structures – from solo as the starting point of communication to the form of the duet and group dynamic.
(...) The performers come on and go off the emptied stage from the auditorium. Hesitations and delayed impulses or reservations when contact and communication are deterred is thus even more visible – where, when, how to begin or finish, what’s the impulse. However, the performance does not shy away from revealing the silences and insecurities, as it understands them not as mistakes but as part of communication.
(...) The performance Just in Appearance Sometimes as Everyone Else makes visible how the body and movement can escape [narrative and defining interpretations] and discover, over and over again, one of their potential languages. The performance stays on the level of the mechanism of movement language and renounces the content of speech. However, while not dismissing the potential readings of images arising from encounters, it does reject the notion that the language of the body would function in a schematic way or that it would be subordinated to some other category.
14.11.2016, RTVSLO MMC, In investigating the experience and language of the body, Nika Arhar 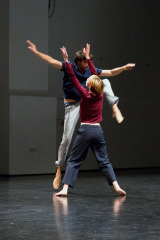 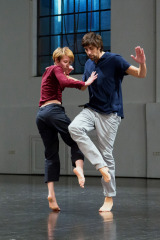 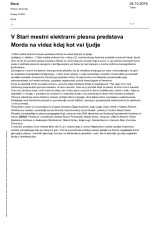 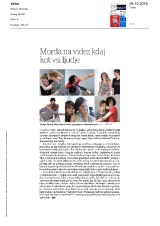 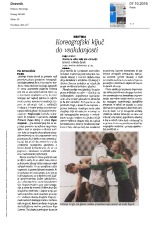 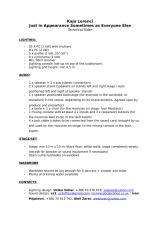 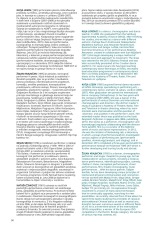 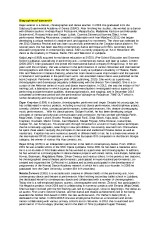 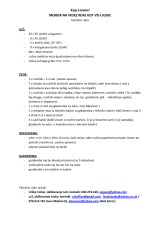