The Shape of My Eyebrows

When Mina Loy published her first poetry collection in Paris in the twenties, no one believed that she was not a fictional character. Years later, when literary critics took her forgotten poetry under their magnifying glass, they wondered whether the words she used in her work were invented or perhaps just written in a less than perfect grammar. Her life and poetry were an unusual collage of emigration, forgotten identities, different emotional states and impulses, lost spaces, subtle perceptions on the evolution of new arts and of the intricate universal and individual enigmas. These enigmas of the real or imaginary body, on the content of inner movement of thoughts and associations, and outer expression of the bodily movement, of communication with fellow human beings and the world, can also be found in the pulsation of Gina & Miovanni's dancing duet.
Rather than steering the compass of our attention to the life of Mina Loy in explosions of surrealism, futurism, and American Dada movement, we aimed for the labyrinths of her poetry, which she herself had called "my subconscious archive" even before meeting Freud in Vienna. This poetry is a map of her states of being and her descriptions of the world around her, but it nevertheless consists of those emotive and almost ordinary daily feelings which open up spaces and rooms for the recognition of our own feelings as we meet the well-articulated reflections of this sensitive talent.
And what does our external shape transform into, when our innermost wishes or emotional states turn to face the world? All our apparently biggest and irrational desires, illusions, feelings – such as longing, love, ideas, archetypes, mythologies, or worshipping are transformed in the real world into unusual states of a "flawed" existence, which we recognize as art, make believe, solitude, hysteria, illness… The inner becomes the external and acquires an extraordinary shape. The metamorphosis of the body hues our states of existence like a litmus paper in a chemical substance. Minna Loy was a poet and a beauty. "Love is the lyrics of two bodies," she wrote. At the other end of the world, in Russia, Marina Tsvetaeva concluded that "the rhythm is a muscle and the verse is the movement of the organs." This uncommon linking of poetic metaphors and bodily expression is the agent which has set off the shape of the performance where the story of a woman, a man, and the world, unfolds through the observation of our own movement. Replying to the question of what did she like best in herself, Mina Loy said "the shape of my eyebrows". And it is under this arched beauty that its beholder is concealed. >>>
Irena Štaudohar

(a fragment)
Contemporary dance dramaturgy therefore instead of recognizing any normative dramaturgy models uses different individual dramaturgy "programmes". We can thus use the "processing" dramaturgy model as a metaphor to show how a specific dramaturgy "programme" works. In Gina & Miovanni the team has employed the poetry and fine art opus of the avant-garde artist Mina Loy as a magical databank containing her forceful intelligence, the complex emotions, an extreme of life experience, and the psychological and physical presence of the real Mina Loy. The authors of this performance did not attempt translating the language of poetry and visual arts into dance, the biographical into the narrative. Instead, they have taken the legacy of Mina Loy and applied it as a "programme language", as compressed intelligence taken as a tool for shaping the structural and emotional specifics of the body of the performance in terms of time/space and movement. One of the most exciting features of this experiment is the actualization of the relationship between poetry and dance which, hopefully, opens up possibilities for re-defining the traumatic relationship between literature and theatre. >>>
Eda Čufer

(a fragment from biographical text about Mina Loy)
Mina Loy (1882–1966) was the one of the most original poets of her generation, and one of the most isolated. She told the truth in a way that was sardonic and uncompromising, employing linguistic structures that were considered unreadable and scandalous. She was thought by her detractors to be unpoetic and unfeminine, by her admirers to be daring and compassionate. She wrote directly and clinically about many subjects that “lady” poets had spent centuries avoiding or euphemizing. Like sex. She was no lady poet. And she was punished for it.
In a time when most female poets were writing romantic love songs in dehydrated verses, she was dipping her pen into glands of estrus and recording the temperature of her vagina. She wrote searing satires about her lovers and exposed the traumas of her marriage bed. She wrote some of the first anti-rethorical poems in any language about divorce, copulation, parturition, abortion, and menstruation from the uncoupling, fucking, birthing, and bleeding woman’s point of view. For these offenses against the traditionally polite genre of verse she was socially ostracized, critically scorned, and historically neglected by the literary establishment. >>>
Roger L. Conover

Narration in written poetry and dance in the performing arts is very similar in form. Even my notes for the Manifestation of the Introvert, my choreography sketches, looked like poetry.
It was important to me to find a new source in movement. Mina Loy’s poetry is the anima of bodily movement in this performance. I have traslated her poems as associations and rhythm, different poetics. Movement was instantly defined with the content and then undefined in Andrea's response and mine, as we poured our own experience into it.
Maja Delak

Both mime and contemporary dance share the body as a medium of expression, but they are nevertheless very different. This creation is in fact an exploration of the meaning in the words of Mina Loy, in the search for emotions that generate the mechanics of exploring as the body creates forms of expression which affect the audience on the same emotional level as poetry.
Andrea Ruberti

»Gina & Miovanni is well-conceived dance miniature in terms of choreography and concept, with many movement and acting details.«
Mojca Kumerdej, Delo, 29.05.1999

Every fibre of Delak’s body and soul is infused with artistic endeavour; therefore, the spectator’s conscience experiences the passion of a woman and dancer shivering with devotion to the character she embodies. Her performance is undoubtedly moving; various sensations and shivering of the soul are given with intensity, but above all one is touched by the extreme essence of her steps and motion. Now they are prompt, convulsive and nervous, then again soft and sensual, undeniably original, although full of classical beauty which is precisely modulated by the changeable touch of different ways and directions.
Marina Rossi, La Provincia Pavese, 23.05.2000

»If Gina & Miovanni wants to be a story of opposite principles, of the so often overplayed dichotomy between two different, but immensely compatible, existences, then it is not successful in this. The dramaturgy is too fragmented, as the scenography, the music, and the both characters, for this to be a contribution to the above altar. But if it seeks to push comments with all their age-old conservatism into the background, so to speak into parentheses, to be able to speak about something else in the foreground, the apparent fragmented character of all levels then takes on a completely different meaning.«
Anja Golob, Vecer, 02.06.1999 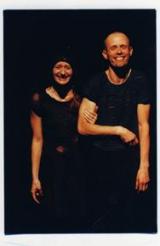 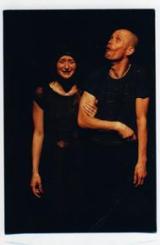 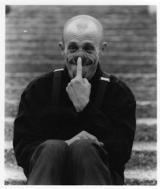 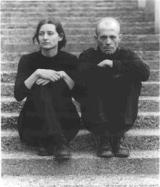 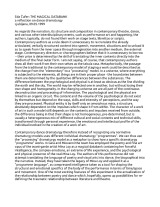 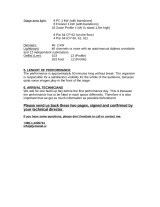 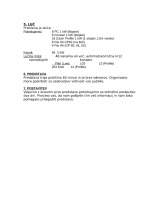 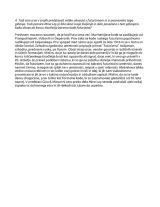 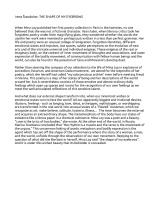 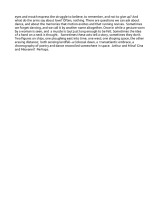