Maja Delak’s eleventh performance is the first production by the newly founded Emanat (Emanat Institute). A dance piece based on the pleasure of the physical and moving, Expensive Darlings is conditioned by the quasi-institutional status of contemporary dance in Slovenia.
The choreographer invited six dancers and actresses to participate in the process of exploring the coexistence of various types of personal engagement, as well as various kinds of aspiration of the contemporary dance corpus. How to realise the impacts of aspiration and one’s own openness? How to allow the coexistence of somebody else’s wish? (Katja Praznik )

Maja Delak: Expensive darlings – a revision (a note on the creative process of the performance), Reartikulacija magazine, no. 4, 2008

Produced by: Emanat Institute
Co-produced by: Festival City of Women – Association for the Promotion of Women in Culture and Ljubljana Dance Theatre
Sponsors: POP TV / Kanal A, OBI, Airsoft Slovenija

... The performance Expensive Darlings is a telling intertwinement of the universal and the individual, the social and the intimate. The seven dancers and actresses – beside the author Maja Delak also Barbara Krajnc, Jelena Rusjan, Vlasta Veselko, Urška Vohar, Nataša Živković and the translator into English Katja Kosi – find themselves in-between the opposing, though at once constitutively connected oppositions: between how they see themselves and how, in their view, others see them, between creative enthusiasm and fear of failure, between accepting their gender and the impression that it might have been easier for them in this profession if they were men, between the pleasure to be on stage and the financial privation behind the scenes of everyday life, etc... The performers embody different roles, from the gloomy Vampirella, the fragile angel, the bold toreador to Latino macho pop singer Adriano Celentano, excellently and wittily interpreted by Maja Delak... Perhaps the performance reaches its peak in the moment, when the seven performers seize the guns and raise them to the audience. Yet, already in the next moment, their ultimate gesture dissolves into a likeable dance entertainment, with the music from the film Barbarella playing in the background. They slip from their ethical, ultimate position on the sharp edge of existence into a strait of entertaining, dance decoration. ... Expensive Darlings is a performance about the struggle for art as an individual ethical position (with all that pertains to this, the good, the bad, delightful, distressing, etc.), and is one of the most engaged performances of the past years in Slovenia.

... Expensive Darlings is a performance about the position of women in the cultural, social and political context of contemporary dance in Slovenia. And in this, it is of key importance. Why? Because it opens up, discloses, exhibits, authorizes, actualizes and problematizes the inaugural point of contemporary dance history in our space: contemporary dance was constituted by women already before the universal right to vote had been introduced in this geopolitical territory, and is as such principally a practice of emancipated women's creativity.
Rebels, Artists, Masochists, Rok Vevar, Večer, 16.10.2007

The smallness of the performing area, submitted to the eyes of surveillance cameras, the tightness of space, which augments the heterogeneity of individuality, intertwines their laughter and gentle voices, outcries and revelations. The space is enveloped by stuffiness, like an invisible – though because of the power it has no less painful – wire. Although it seems that the performance should be brought a step or two further, it succeeds in striking a powerful blow: the one, which is (if we translate the title of a song by Adriano Celentano for this purpose) delivered only by a touch of the fist. For the pain is more gnawing, when it mitigates the circumstances and merely caresses with the fist.
A Touch of Fist, Ana Perne, Delo-Polet, 11.10.2007

…Expensive Darlings is a performance, engaged in the noblest sense of the word. Its engagement is directed into a search of new spaces for the movement of the body and thought.
… The performance by Maja Delak conceptually and actually opens up the body and movement for the nexus where that pertaining to the woman synchronously manifests itself in the dance-movement material. The performers – besides the choreographer also Barbara Krajnc, Jelena Rusjan, Vlasta Veselko, Urska Vohar, Natasa Živkovič and a translator into English Katja Kosi – in the space-time of the performance, arising from both movement as well as mental material, connect the oppositions inner / outer, male / female and public / intimate. Expensive Darlings thus speaks about the duality of accepting one’s gender and framing it into conventions of the gender of the other. The different roles, performed by the seven dancers and actresses, are distinctly heterogeneous, from Vampirella, the fragile angel, toreador, to Adriano Celentano.
As incessantly sliding signifiers with elusive signifieds, they allow for the thematization and problematization of the protagonists’ views, which are at once intimate and political – though not only in the moment, when the seven performers seize the guns and raise them to the audience to shoot off their gender and culture conditioned prejudice and conventions. In the next sequence, their apparently radical gesture dissolves into a likeable dance entertainment, with the music from the film Barbarella playing in the background, announcing the omnipresence of the society of the spectacle.
Mapping Contemporary Performing Arts II, Tomaž Toporišič, Dialogi, 11-12/07

The viewer’s focus elegantly passes from one performer to the other, who – despite a rather large number of the cast – equally distributes the time and space for their stories, without repeating themselves, although they share many a thing. All are women, all devoted themselves to the stage, all work in unfavourable conditions, all reveal themselves to the audience, and above all, they all love the art of dance.
Radio Student, Festival term II.: City of Women; 8.10.2007, Alja B.

…In Delak’s performance, stereotypes are exposed but never completely devalued or torn down. Dynamism of the performance was based on the body’s own rhythm and on individual physical actions, while the mostly tranquil synchronous motion provided a counterpoint to the regular rhythm and showcased the differences between individual dancers, each of them with her own history. The role of the translator (Katja Kosi), convincingly presented as mechanical, was a significant compositional part of the performance, providing an outside view and a degree of objectivity. From the back row, it was unfortunately impossible to see the ten screens showing live video from backstage and nine other locations in the hall. Regarding the dance, it tended towards simplicity, individuality, calmness and most convincingly towards sincerity. On its surface the performance thus presented cheerfulness and laughter on account of stereotypes; but underneath the surface it was all about its own existence and development of contemporary dance and, most importantly, about the love of theatre and people who persist in its hopeless situation. A calm but convincing protest with a clear concept, though reasons for the current position of contemporary dance in Slovenia could perhaps also be found within the wider social context and its values.
Maja Delak Is Not Laughing; Jasna Zavodnik, CoWeb

... "Maja Delak was especially interested in the open, relaxed structure, a result of thinking about how to construct a form that reveals the vision of seven creators. Not only do direction and choreography meet in the performance (a unique dance theater where the dance and movement material is connected to the singing and acting pieces), but the choreographer is at the same time the director who (together with six co-creators) conceives the performance. Such a method of work presupposes extensive preceding discussions that enable the articulation of individual positions as well as their common vision. The choreographer found her conceptual inspiration for the structure in Sedwick, who in accordance with Deleuzian topology and the consideration of alternative spatializing methods, introduces the concept of "beside" that enables an non-hierarchical coexistence of the seven solos. (...) Regarding the structure of the performance Expensive Darlings, it is especially telling, how the awareness of the power of the institution (a cultural and political instance that regulates art production and distribution) becomes an integral part of the performance. The realization of the set design by Marko Peljhan, who equipped the whole performance space with a surveillance system establishes a metaphor of a system that mostly surveys contemporary dance activities instead of appropriately supporting them." ...
"Female" Creativity in Slovenia: The Case of Contemporary Dance - Mojca Puncer, Maska Magazine - The Passage Of The Gaze, 113-144 - spring 2008 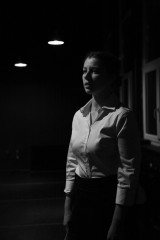 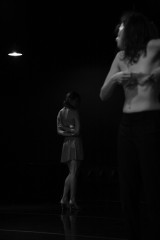 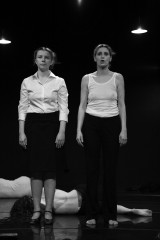 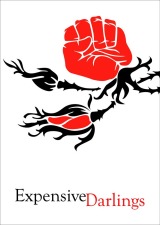 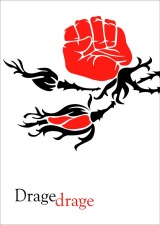 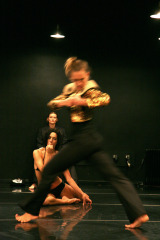 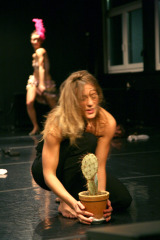 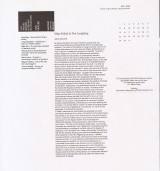 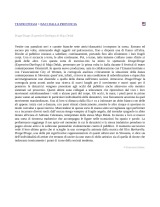 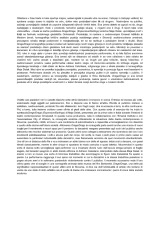 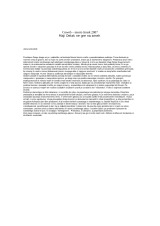 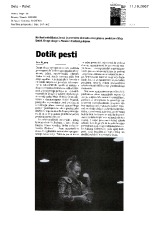 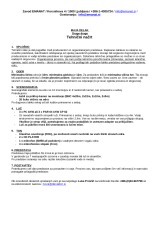 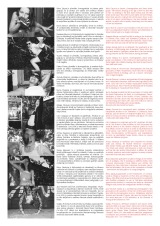 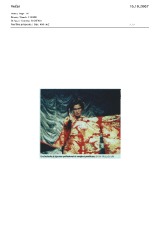 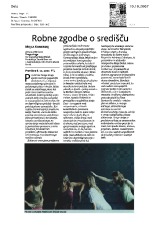 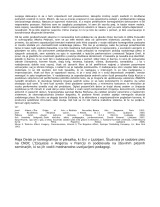 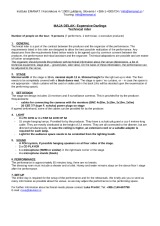