Blandine Calais-Germain: Anatomy of Movement; Introduction to the Analysis of Movement Techniques

The book Anatomy of Movement: an Introduction to the Analysis of Movement Techniques, first published in 1984, with four consecutive reprints, and translated to nine languages, offers comprehensive access to the basics of anatomy for all movement techniques. The book features abundant illustrations to describe the movement apparatus: over 1000 illustrations with comments show the bones, joints, and muscles in movement, consecutively discussing: the trunk (spine, pelvis, chest), upper extremities (shoulder, elbow, wrist, palm), lower extremities (hip, knee, ankle, foot). These descriptions are followed by comments for each part of the body: morphology of the area, movements performed by the body part in question, bones, joint structures, and different muscles of the area.

The author of the book Blandine Calais-Germain, dancer and dance pedagogue, was educated in the Montessori Method and later continued her studies of kinesiotherapy, which she completed in 1980. During her studies Calais-Germain was particularly interested in anatomy, which is usually considered boring and dreary; however the author has succeeded to present it in a simple, vivid, and easily accessible way, also to the lay reader. Anatomy of Movement, as presented by the author, is a method using a multiperceptional approach to teaching anatomy as well as a method of body work based on anatomy. 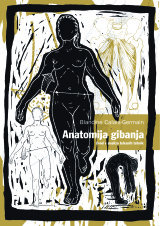