On the day of the release of the debut album of modular pseudo electro duo Warhorse Kamizdat is preparing a dive into an industrial dungeon. The pillars of Warhorse are Shekuza and Lifecutter, internationally critically acclaimed electronic artists from Slovenia, who in 2020 joined forces for a new, darker techno project, fueled by anger and frustration. Before presenting their work, released also on album Atlatl (out 12.10.2021), an experimental techno duo Stagnat will do the warming up for the overwhelming dose of tense electronic music of the evening.

Warhorse is a new project of two Kamizdat artists, Miha Šajina – Shekuza and Domen Učakar – Lifecutter, in which they join forces to face their demons and contextualise trans, in connection to the nearby presence of death. Their creative paths first crossed at a special concert for BIO26 Biennial of Design in 2019 and a year later they spent a week at an art residency in 2020. They immediately clicked, because they share an interest in artistic club music and aesthetic rhythmic excess, also when wrapped in darkness. And that is how Warhorse came to be and their first compositions, inspired by the medieval and more recent torture devices. On the album Atlatl (an ancient hunting tool used in spear-throwing) the aggressive side of their creativity is explored. The cold and industrial techno, mixed with dark ambient, is the sound for the times of contemplative anger and for dancing in the darkest times of the night.

Stagnat is an electronic a/v project of two Slovenian artists, living between Vienna and Ljubljana. Their outburst is a result of a thrive for a joined musical expression and a continuation of the past visually-centered artistic endeavors. The result is of experimental nature, techno with a darker shade, with a ruckus of a passing train, chaotic bird singing, a path into a gray morning with a resentful teenage angst. Their first gig was as an improvised live act at Festival Izvir in the Summer of 2019. Since then they have presented their music with several known names as Voidloss, SHXCXCHCXSH, Lag, Vlaysin, Paula Koski and at events like Temnica and Tektonika at Klub K4 and Festival Drops. In 2020 they release their first EP Synchrony of Falling and are featured on the compilation of the local record label Sigma5. They will publish their debut album Endonoma with their experimental film later in 2021 at the record label Singularity Recordings. 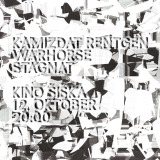