Kamizdat is proud to present a truly special evening sound story created live on the spot by two media artists, who–each in themselves and one for the other–invite us to immerse into the landscapes interwoven with signals of a reality that indelibly enters the listener via their unique imagery and contemporary sound art practice. Kamizdat is releasing their albums Transversal Is a Loop and noise for strings, vol.1 in September (on September 16 and 30 respectively), but they will be available at the concert as a USB booklet in a renewed Kamizdat design. You have our word that if you come you are in for an exceptional sound music experience!

█SAŠA SPAČAL█
Saša Spačal is an artist working at the intersection of living systems research, contemporary and sound art. Her work focuses primarily on the posthuman condition, where human beings exist and act as one of many elements in the ecosystem and not as sovereigns. Her work was exhibited and performed at venues and festivals such as Ars Electronica Festival (AT), Transmediale Festival (DE), Athens Digital Arts Festival (GR), Perm Museum of Contemporary Art (RUS), Chronos Art Center (CHN), Eyebeam (USA), Cynetart Festival (DE), National Art Museum of China (CHN), Museum of Contemporary Art Metelkova (SI), Kapelica Gallery (SI) and others. She was awarded the Prix Ars Electronica Honorary Mention and nominated for Prix Cube.
https://www.agapea.si/

█BEEPBLIP█
Ida Hirsenfelder [beepblip] is a Ljubljana-based sound and intermedia artist. She is interested in the history of media, archives and their disapearance, and media archeology. She is an advocate and user of free and open source software. She was a member of the DIY sound collective Theremidi Orchestra. In collaboration with intermedia artist Saša Spačal, she has been creating sound experiments and sonoseismic installations, as well as co-founded ČIPke, Initiative for Women with a Sense for Technology, Science and Art. She has collaborated with media artist Robertina Šebjanič and sound artist Aleš Hieng – Zergon on Time Displacement / Chemobrionic Garden (Aksioma Project Space, Ars Electronica Festival 2016). Ida has performed under the alias beepblip at Electric Nights, Athens (2015), Topographies of Sound – The Famous Unknown, ŠKUC Association (2017); radioCona:wolFMoon (2017); radioCona:Winter Exor:cism, Kino Šiška Centre for Urban Culture (2018); Show 656, radia.fm (2018); AMRO – Art Meets Radical Openness, Linz (2018); and released her work on the compilation Access Frame: Collectivity, Kamizdat (2018). More at http://beepblip.org 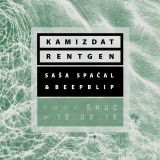