Kamizdat is celebrating the 2022 Netlabel Day with a release of another compilation of local alternative electronic music: 12 exclusive tracks that span a wide spectrum of electronic and acoustic genres: from noise and sonic art, computer music, spoken word and artistic folk.

Colony, to colonize, decolonization: defining the border between the individual and the community, redefining the imperialist past, colony as a form of survival of species. The concept of colony is theme of the 12 mostly exclusive tracks on this years Kamizdat compilation of adventurous music which will be published as a zine and QR cards on the international Netlabel Day, July 14th 2022.

On the day of the release two of the featured artists will perform in the summer ambiance of Kino Šiška with the support of a fellow DJ.

The event will be streamed at 20:00 CEST at https://live.pretok.tv.

Muzikačaka is a project of pianist and sound artist Sara Korošec. In her work she combines acoustic and electronic instruments, mixing piano, vocals and accordion with electronics and field recordings. Her music is inspired by local traditions like traditional singing, instruments, stories in rural environment and the lack of connectivity with world. She releases her albums on her Bandcamp page, the last one titled “Connection And Life At A Distance” published in 2020.

Lip Rouge is an experimental music duo by Karmen Ponikvar and Eva Mulej. They explore sounds with analog synthesis, voice, recorder and different instruments. Their inspiration are early electronic music, vocal innovations and made-up stories. With creating soundscapes they form a music vocabulary of sonic frequencies and altered sounds. They have just released their first album titled “Tūndâr” at the record label AmbientSoup.

NinaBelle is a techno DJ, musician, vocalist (Warrego Valles) and flutist from Ljubljana (Slovenia). She is a classically trained flute player who, after graduating at the Academy of Music in Ljubljana, studied in Rotterdam and Klagenfurt. She was a tireless explorer of jazz improvisation and continued in the field of electronic music as a relentless digger of electronic sounds, a vocalist, a lyricists, a DJ, a producer, an event manager and also a musical selector for radio shows. She’s primarily active as a musician & vocalist with Warrego Valles, an electronic duo collaboration with producer Nina Hudej and also as a promoter of equal opportunities and diversity in electronic music, focusing on presenting live alternative electronic acts in Ljubljana. 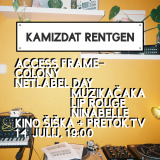