Maja Delak and Mala Kline show their preciseness in the structuring of the idea and the performance itself. Their movement is well synchronized; it makes a transition from smoother to more forceful one, from feminine to masculine, from human to more animal like. In content rich scenes, where every slightest move plays a part, little bits of humour can be found, as in one, where unusually shrivelled Mala gazes at the audience with a naive animal like expression on her face. The performance probably reaches its high point at the end, when the before slower tempo gradually speeds up, and in the swiftness, that the modern society has succumbed to, in dense form, acts out once again already seen scenes, which then develop into new directions and close in the frozen image of a drowning female face.

The dance performance HI-RES, highlighted in white, is not brightly optimistic, but it is a deep creation, which draws the spectator in its mystical dome and transfers the energy of the atmosphere onto himself.

Space happened to the Slovene contemporary dance, and not a moment too soon. This is a performance of two dancers who are without a doubt the best the country has to offer. It is designed all in white, with a thick edge on the ramp, rising from the ground, and a rectangular dent, partly covered, hollow double bottom in the back wall which serves as a projection canvas mostly to two (at the sides of the dent), sometimes one (above her) and in the closing scene four (all already mentioned above and central in the dent) simultaneous projections. The video is the elementary part of the performance and its rhetoric is suggested by the name of the show – high resolution, sensitivity for details. Dance which fills this floating like dome is completely internalized by the title (nomen actually est omen, which seldom happens in the Slovene dance production). The show leaves you with the impression of a pure premeditated stage work, composed only of details.

It is built from individual scenes, which are divided between themselves with amazing light changes that direct the transitions between atmospheres, stories in the projections which every now and then leak over the boarders of the scenes. The titles of these scenes are projected onto the ramp. These titles do not have a full meaning and are not bound in a sense that they direct the spectator’s perception of the performance, but are a good signpost to the content direction. In the last scene in which the aesthetics of the image fills the space and takes both motionless bodies laying in the sun while at the same time all of the titles merge into a unified whole – a projected poem takes their place, which ends in a full meaning sentence. On the one hand all of the spoke out and projected words in the performance connect with that sentence to form a tense thread and on the other hand they are tied to the video. What we get is a self concluded whole without unnecessary leftovers in which all the composing parts are thoughtfully connected. This is the reason for its expression, methaphorics and aesthetics being at an extraordinarily high level. This alone in my opinion places the HI-RES performance at the top of this year’s Slovene dance/movement production. All of this is just a frame for the dance itself – it is the dance that this performance is the strongest in. It is a vast space but at the same time fulfilled with the dance. The movement is extremely accurate and merged with the content. The know-how of dance material makes the excess feasible, an excess such is a withdrawal from horrifically grotesque scene “The singing thirst”, which can be connected with the title. It has some similarity with Vera Montero and at first sight gives an impression of being taken out of the contest, but soon it shows that it is one of the most important parts of the content premises. The dance in the HI-RES holds an astonishing inner logic, which on its own weaves the content and simultaneously turns it inwards and is at the same time distanced from it with commentaries for example. It is amazing how a body can open itself to the content and unmistakably intertwine with every movement. Such is the scene before last entitled “It could have been”, where body shadow repeats the same movements over and over again each time ending and beginning with a fall. As if reciting the famous Beckett’s sentence “Fall. And than fall again”.

Love probably could neither be danced nor described better. 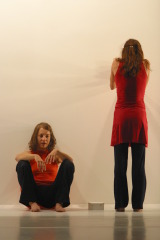 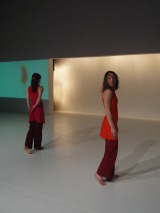 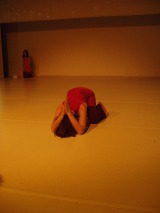 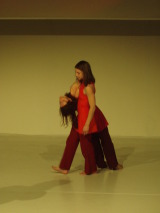 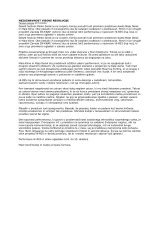 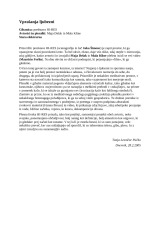 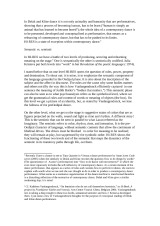 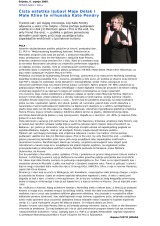 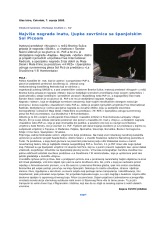 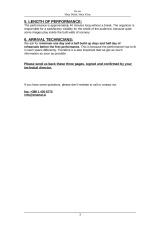