WE MUST SAVE OURSELVES.
No one can do it for us, these deep issues, states of mind are personal and must be personally addressed. We have to let go, it's going to be beautiful. We have to collapse, to be born again.
We have to die. We are all going to die.
Anonymous psychonaut, source: Erowid.org

Audio-visual dance performance Terra umbilicus subverts the norms, it explores altered states of consciousness and deviant forms of existence. Moving away from the original culture, it brings together fragments of freedom, love, anxiety, hedonism, restlessness, disgust, belonging, and destruction. Exceeding own potential and limitations, it integrates them in a spatialized movement meditation, placed within a changeable and responsive visual and audio environment that pulsates in the rhythm of abstract noise and blurred images.
Terra umbilicus is a space of radical freedom and audacity, a point of collapse, a perturbation. This process-based hybrid performance offers a glimpse of the uniqueness of a seemingly fragile inner world of the individual who is wandering the complexities of the modern society in search of his centre, trying to find the long-lost “navel of the world”.

(...) Daniel Petković describes his Terra Umbilicus as “a spatialized movement meditation, placed within a changeable and responsive visual and audio environment.“ Its significan feature are visual projections, video landscapes by Urban Belina, generated live and thus different for each event. The digital landscape is projected over the scenography of six pillars and on the walls behind them. Moving around the pillars, reminiscent of Greek sanctuaries, such as the one at Delphi, where people sought counsel regarding important life-changing decisions, Petković, in his movement meditation, performs the altered states of consciousness, experienced upon the dissolution of one’s identity, in moments of collapse, which at the same time make possible the formation of an altogether different identity. (...)
Nika Arhar, MMC, Exploring states of existence in a visual-dance sanctuary, 8. 7. 2015

(...) The performance Terra Umbilicus aimed at breaking ground of the theatrical psychomagic à la Jodorowsky, which is in itself a fresh approach in our (socrealist) space. Its intention can be seen in an uncanny atmosphere, radiating from the silvery video projections, sinister music, and Petković’s voice. The voice often functioned as an autonomous element – firstly because of the sound’s volume and secondly because it was delivered in an unusually unaffected, unflinching way. Despite Petković’s pronounced physical actions, it did not interpret, but functioned as a commentary. The most powerful tool of the performance broke away even from the words’ meanings, gaping open as rhythm, as sound, and as auditory hallucination. (...)
Ana Schnabl, Designer “navel of the world”, Dnevnik newspaper, 14. 7. 2015

(…) Terra Umbilicus is a performance of considerable meditative depth, delivered in the language of silent movement and enveloped in the landscape of audio-visual forms. It evokes birth, enacts thoughts, and emits serenity. This unusual combination of mental landscapes and their visual materialisations should be credited as a noteworthy debut of the young maker and dancer Daniel Petković, who – as it seems – will have a lot to say in the language of contemporary dance art.
Daliborka Podboj, “Navel of the world” on his birthday, Parada plesa platform, 25. 7. 2015 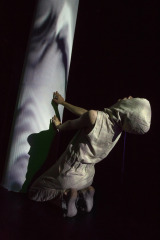 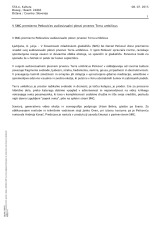 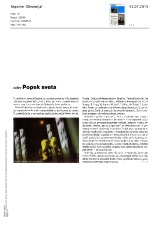 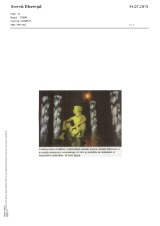 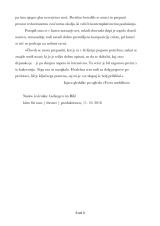 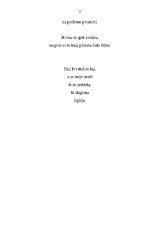