SHE is an entity composed of the aura of many other female ones. She is a witch, She a siren, She is whichever animal she sees fit. She is Hekate, Nyx, Eva, Pandora, Lilith, Medusa, Sycorax … SHE is made of many; many shes, many layers, many identities. She is divine, yet She is just a woman.

Throughout his-story, She has kept strength and knowledge that have been banned from the world in which we live. She patiently waited through moons, through cycles. She is ready to scream as the most feared siren and whisper like the more renowned witch they could not burn. She doesn’t mind being feared, She stands tall, and She no longer apologizes for being, doing, or occupying the space She needs.

Train your eyes to the dark. See her. She speaks all female tongues. Hear her. Because SHE is just one. She is ready to show the world her true selves, her deep waters, her dark side and her dusk light.

SHE is a dance and voice solo performance by Anamaria Klajnšček. She drew inspiration for the piece from three main pillars: the women in her family and their archetype of the female powers, Sirens as mythological creatures and Witches as real female entities, as well as the Dark Ages’ his-story of classifying women as such to gain power on their expense.  In her latest project, the performer and creator has used the following books as a research foundation: Mona Chollet: In defense of Witches, Clarissa Pinkola Estés: Women Who Run With the Wolves, Silvia Federici: Caliban and the Witch, Demetra George: Mysteries of the Dark Moon.

Anamaria Klajnšček (1996) is a Slovenian dancer and choreographer, mostly working between Spain and Slovenia. After finishing Art Sencondary School in Ljubljana she continued her studies at Amsterdam Academy for Theater and Dance (AHK). Later she moved to Germany and in season 2017/18 worked for a dance company called TanzMainz, where she collaborated with choreographers such as Sharon Eyal, GN/MC, Guy Weisman & Roni Haver. The last couple of years she has been working as a freelancer with various choreographers, currently touring with performances by Roser Lopez Espinosa, Pere Faura, Žigan Krajnčan, Guy Nader & Maria Campos and her own creation COSSOC. The latter is a collaborative duet with a catalan dancer Magi Serra, with whom they perform in many international festivals.

Special thanks to Nora Baylach, Gabriela Lotaif and all the witches of my family. 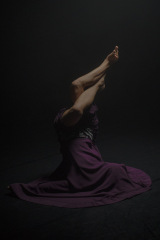