Image Snatchers is a regularly held event, where art and conviviality converge. Modular in nature, always surprising, and never the same, it has been constituted collectively by the group Feminalz through different formats of collaboration. The collective started developing their working process in 2013, which is marked by an ambitious reflection and investigation of the “feminist post-dramatic burlesque”. The collective, creating new artistic contributions, commentaries, messages, and meanings within the technoburlesque evenings continuously, works to develop thematic clusters, characters, and narratives with which they reveal their ways of being to the audience in a very direct way. With the series “Image Snatchers Present”, the collective Feminalz embark on a new way of working, as the members of the group will take a closer look into the life of one of the technoburlesque characters. The first to be presented in this new framework is Urška Vohar, appearing as Mathilda Buns in Image Snatchers, who is preparing her solo performance for September 2017.

Matilda is a woman, at least usually she looks like one. She is not an artist but she finds inspiration in ordinary things, like bananas and monkeys, swimming pools and milk, spandex and leotards, disco dancing, her breasts and concepts like woman, mother, family, ambiguity, foolishness and freelance. She loves singing, slamming drums and song writing. She works with images that are based on her daydreaming, but not exclusively. Stage is her home and that is where she truly comes alive.
In her first independent project she would like to continue working on ordinary things and discover almost endless possibilities of metaphors that those things can offer. She would like to work with a collective feedback as she is a part of a collective called Image Snatchers. She would like to address situations that she finds disturbing in her everyday life and perform them on stage. 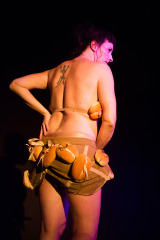 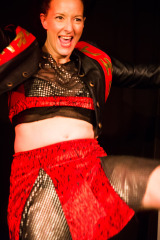 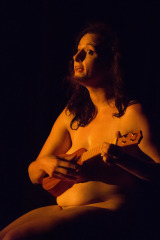 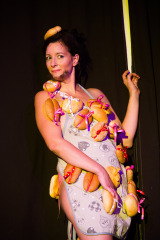