Mikhail Bakhtin: Toward a Philosophy of the Act

Toward a Philosophy of the Act is an unfinished and incomplete philosophical fragment written by Mikhail M. Bakhtin soon after he completed his studies in 1918, in the years following the October Revolution, when he lived and worked in Vitebsk and Nevel. First published as a fragment in USSR in 1986 and translated to English in 1993, this text from Bakhtin's early, pre-linguistic, Neo-Kantian period became an indispensable element providing an insight both into the formulation of original problems, around which later on the Bakhtin circle had been formed, and into the sources of a philosophical formulation of the gap between the “real” and the “symbolic”, which was later defined in similar terms by poststructuralism. Further, the text also offers an extremely inspiring and terminologically innovative articulation of the philosophy of the act that extremely accurately comments on contemporary approaches to the theory of performance and the performativity discourse.

Mikhail Mikhailovich Bakhtin, one of the great names of the 20th century humanist thought, began developing his most influential theoretical concepts, which later importantly marked especially Western postmodern humanist thought (e.g. chronotope, dialogue, the carnivalesque), already in the 1920s. Living in a rather chaotic historical period, Bakhtin sought the centre of his personal scientific and universal position in a newly defined tradition of art and culture, which in the 1920s he still tried to describe with the established philosophical language. Two Bakhtin's works from this period – a sort of theoretical twins – give evidence of these searches. The first is an already published Slovene translation of the essay Author and Hero in Aesthetic Activity, which treats the main questions of this period within the confines of aesthetics, while the second is dedicated to new investigations in the frames of general philosophy and ethics under the title Toward a Philosophy of the Act (K filosofii postupka). 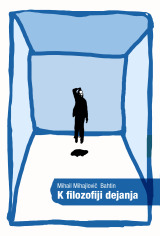