Theatre for Birds (Teatro para pájaros) shows a group of six people enmeshed in a web of unusual love relationships. The dialogues focus attention on the power games between partners, on the silent aggression and submission that determine the politics of every relationship. Veronese persistently alludes to man's vulnerability, to fear of losing one's partner in an atmosphere of light entwinement of relations, and to the impossibility of expressing any kind of a fixed meaning through the medium of language

Daniel Veronese (Argentina) is an actor, writer, director and puppeteer. In 1999 he was one of the founders of the El Periférico de Objetos, acclaimed theater group, renowned for its political and confrontational productions, many of them combining puppets and life-size dolls with actors onstage. Daniel Veronese is the writer of over 20 texts, which have been published and translated into Italian, Portuguese, German and French. He directed more than ten of his own theatre pieces and has received numerous awards. His work has been presented in international theater festivals in Brazil, Australia, Germany, Ireland, Switzerland, Portugal, Mexico, Spain, Belgium, and France. From 1999 to 2005 Veronese was artistic consultant of the Festival Internacional de Buenos Aires. In November 2006 American director Jay Scheib staged Daniel Veronese’s Women Dreamt Horses as part of Buenos Aires in Translation at P.S.122 in New York. 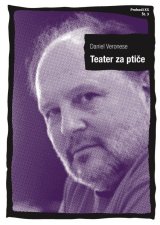