Produced by: Emanat Institute
In collaboration with: Bunker, Ljubljana
Supported by: City Municipality of Ljubljana – Department for Culture
With the help of: Hiša veščin, Ljubljana

On the podium of the Old Power Station, organized into an apartment with a simple arrangement of chairs, a clothes rack and a plant, lighted with several self-standing lights, which serve as authentic stage lights – which is an imaginative intervention by the author Urška Vohar, who is also the light designer – we observe the tendencies of three individuals (alongside the author herself also the actors Gregor Gruden and Barbara Krajnc), who are repressed but at the same time also constituted because of social conventions. The very fact that the starting point of the performance is delivered with wittiness, as the stage situations are often exaggerated, allows for the entering into or, better, the presentation of pathology of human tendencies and behaviour. Thus, we see dancing and singing along a pop song, mischievous consumption of bananas, disgorged into a bucket by the dancer, we observe her transformation into a seductress in high heels and a tight dress. Barbara Krajnc communicates in detail the history of her successes. By standing in front of us naked, with a barely hidden penis, Gregor Gruden exhibits the exclusive tendency for sex change. No less moderate are the sequences, which examine individual’s relation toward the other, whether it includes the other as a love or a sex object. The author’s statement how we approach one another with own desires, thus risking the possibility of suffocating or appropriating her/him, can be summed up with a scene, when one of the actors slips down the man’s shirt and directs his touching (the man subsequently starts masturbating), or with a scene, in which the man and the woman, dancing to gentle music in the background, turn into a more and more tight and aggressive duet.
Ana Schnabl, Dnevnik, 04.10.2008 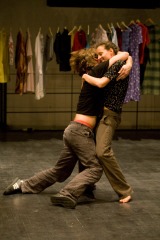 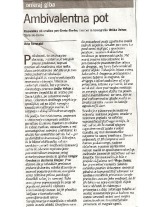 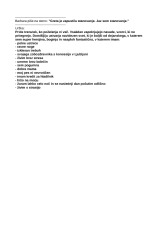 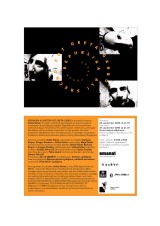