Marcipan or Plexi is an ad hoc project by the Belgian director Marijs Boulogne. The project is a collaboration of Slovenian performers, selected at the five-day workshop in Ljubljana, with the Belgian actresses Eva Schram and Timna Vanhecke. After the public presentation of the piece in Ljubljana, the Slovene-Belgian team presented the project at Tanzquartier Vienna and on tour in Belgium.
Gravitation (from Lat. gravitas: "heavy") is the physical force that describes the mutual attraction of masses. Above and beyond that, in the psychological sense it is to be understood as an affection between people, which on its part can lead to new difficulties – such as to pregnancy, which in Romance languages is often derived from gravitas. Taking up the various meanings of the word, the performance sketch Marzipan or Plexi  by Marijs Boulogne tells of the friendship of a pregnant girl with a mermaid, of the life of sea creatures in a gigantic deep-sea aquarium and of desires, symbiosis and sexuality. When one day the Plexiglas wall of the container bursts, the sea creatures are released into another reality and new gravity.
In the story of Marzipan or Plexi, performers become sea creatures exploring mutual benefits, pleasure, and symbiosis with their 1001 tiny little sexes and hierarchies. Locked in the same space, with their own mating sounds. “There exist no countries, no governments and no borders. “There are no rules and no lies. Here exist only waves. There is water or not.”

The text was created with a grant by the Flemish Fund for Literature. 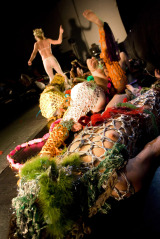 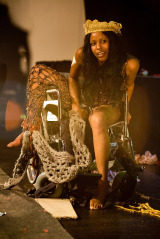 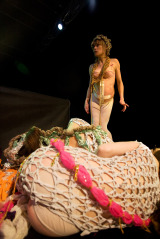 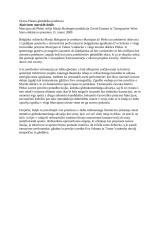 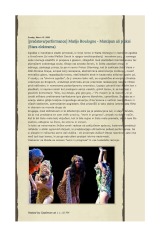