During the weekend workshop, Hasmik will present and teach Armenian folk songs, including work songs, love songs, ceremonial songs, songs of longing, and traditional Armenian lullabies from across the Armenian homeland. The songs will be taught according to their specific regions and dialects, so that participants will gain a true understanding of the Armenian folk song.

Hasmik will also teach several traditional Armenian folk dances, representing the different regions of Historic Armenia. The dances are mostly circle dances, and include men’s dances, dances for women, mixed men and women dances, also those known as “songs of dance,” in which the dancers sing as they dance (each dance corresponding to a certain ceremony, such as the wedding, funeral, national holidays, etc., dancing being an indivisible and integral part of each Armenian ceremony).

Folk singer Hasmik Harutyunyan was born in 1960 in Yerevan, Armenia. She graduated from the Yerevan State Pedagogical Institute and the Department of Vocal Music at the Arno Babajanian School of Music. Ms. Harutyunyan began her professional career working as a soloist for the Akunk Folklore Ensemble of Armenian National Radio, a group founded by historian and folk singer Hayrik Mouradian.

In 1995, she helped found the Shoghaken Folk Ensemble, participating in the Music of Armenia folk music recording, and sang in Armenia Anthology, Shoghaken’s award-winning CD released in 2002 by Traditional Crossroads. She has performed with Shoghaken in concerts in Armenia, France, Germany, Estonia, Russia, Canada, the United Arab Emirates (Sharja), and the U.S., including the Folklife Festival in 2002, organized by cellist Yo Yo Ma, in Washington, D.C., and their 18-concert tour in 2004. Also in 2004, Hasmik’s first solo recording, Armenian Lullabies, was released, featuring traditional lullabies from the provinces of Historic Armenia. Armenian Lullabies was chosen as the best Armenian CD produced worldwide in 2004 by the NY Times. On the CD, Hasmik sang both a capella and accompanied by Shoghaken Folk Ensemble musicians. In 2006, Ms. Harutyunyan and Shoghaken performed in Theatre De La Ville in Paris, France.

In 2008, Harutyunyan performed with Shoghaken in a 24-concert tour of the US and Canada, including concerts in Carnegie Hall and the Kimmel Center in Philadelphia. In April, 2009, Hasmik presented a concert of traditional Armenian lullabies, as well as conducting folk song and dance workshops at the Giving Voice Festival in Wroclaw, Poland.

Hasmik Harutyunyan has also participated in several recordings for Face Music of Switzerland, a producer of traditional ethnic music from around the world. With Harutyunyan family members, Hasmik sang for Ensemble Karot I (2001) and Ensemble Karot II (2003). In 2005, she led the children of the Hayrik Mouradian Traditional Song and Dance Children's Ensemble, which she directs, in recording Traditional Children's Songs of Armenia. In 2007, Hasmik and her brother Aleksan recorded an album of traditional Armenian work songs, many collected by Komitas, also for Face Music. In 2010, Hasmik and Aleksan recorded an album of traditional Armenian wedding songs, again for Face Music.

In collaboration with: Cankarjev dom, Španski borci and City of Women
Financially supported by: Municipality of Ljubljana - Department for Culture 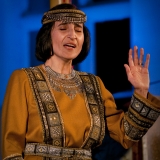 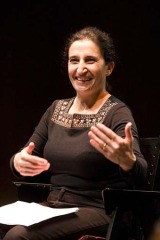