The stage of Komuna will occupy the apparatuses of two local electronic artists whose releases stand out in the region. The poet and electronic musician Gašper Torkar will present his anticipated latest release after working for many theater performances and presenting the single Harlesquinesque. Supporting him will be 08080 (Jure Anžiček), a sound designer and a producer from Slovenia, active in various experimental music projects, who will present the music from his first release Astro Disco.

Gašper Torkar is a multi-faceted artist whose body of work, stretched between poetry, music and other artistic forms, has brought him to various literary, theater and club stages. At the 2016 Club Marathon, he proved himself an excellent architect of electronic soundscapes, as you were able to hear in his musical debut Dreams of Others.

Jure Anžiček (08080) is a sound designer and a producer from Slovenia, active in various experimental music projects (most notably in Ansambel PRSA), who also performs solo. Using modular synths and relying on improvisation, he sculpts distorted, abrasive and harsh sonic soundscapes on the fringes of noise and techno.

“Kamizdat Rentgen” is a glance under the surface of the skin, a look into the fleshy entwinement of bones, muscles and nerves that shape the heterogeneity of the sound bodies. It is a series of music events organized by Kamizdat to increase the visibility of adventurous music makers who dare to venture into the territories where no one had been before. The events are often closely connected with the label’s new releases.

Produced by Emanat in collaboration with Kino Šiška Centre for Urban Culture and with the support by the Municipality of Ljubljana and the Ministry of Culture RS. 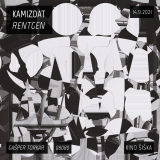