The first Kamizdat Rentgen event marks the launch of Luka Prinčič's new EP release Entropy EP, which explores the syncopated rhythms of future bass electronics and intermittently dark metal noise. While the context of how the music was created is somewhat shrouded in mystery, which is partly undermined by the lyrics inside the cover though, the concept of this EP connects to bodies in motion and the composition of bodies in space. It partly also arises from a physical perspective: oscillation – gravitation – radicals, telling a story about waves, particles, forces, and energies.

Kamizdat Rentgen offers a glimpse under the surface of the skin, a look at the fleshy intertwinement of bones, muscles, and nerves that constitute the heterogeneity of sound bodies.

Hosted by Kamizdat, this is a series of evenings aimed at greater visibility of adventurous music makers who are digging their way through the often untrodden terrains. The evenings are usually related to new music releases. 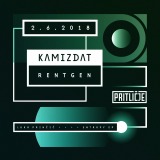