Performing, directing, writing and interpreting scores - how to collaborate? How can we work together? Between the hierarchical pyramidal structures to the collective, there is an endless plurality of forms of collaboration possible. This workshop addresses different models of conceiving and reading scores, directing and collaboration. It also looks at gender performance as a form of score that encompasses language, gestures, and all kinds of socio-symbolic signs. It examines the boundaries between score/interpretation, rehearsal/performance, director/performer, and audience/presentation, and explores the artistic form of "Burlesque". This workshop's focus is an investigation through praxis. It ends with a public showing.

Antonia Baehr is a choreographer. What characterizes her is a non-disciplinary work and a method of collaboration with different people, using a game-structure with switching roles: each person is alternately director / author and performer for the other one.
She graduated in Film- and Media Arts at the Hochschule der Künste Berlin with Valie Export (1996) and obtained a DAAD-grant and a Merit Scholarship for the School of The Art Institute of Chicago. There she completed her Master in Performance with Lin Hixson of the performance group Goat Island and began collaborating with William Wheeler.
Since 2000 she is based in Berlin. She co-organized “Labor Sonor“, an experimental music and performance series, at KuLe from 2001 to 2003. From 2006 until 2008 she was associate artist in residence at Les Laboratoires d’Aubervilliers in France. In 2008 she published her book: RIRE / LAUGH / LACHEN.
Her productions include: Holding hands (2000), Un apres- midi (2003), Cat Calendar (2004), Larry Peacock (2005), Merci (2006), Laugh (2008), Over The Shoulder (2009) and For Faces (2010). Antonia Baehr works a.o. with Lindy Annis, Gaetan Bulourde, Valérie Castan, Sabine Ercklentz, Andrea Neumann and William Wheeler. She is the producer of the horse whisperer and dancer Werner Hirsch, the musician and choreographer Henri Fleur, and the composer Henry Wilt.

Ida Wilde, also referred to as Keren Ida Nathan, is a Choreographer and Director, born at the London University Hospital in 1975. In 2003 she received an M.F.A at the London School of Art. Though she lived in the Americas, and Palestine, she longed to live some place where Victorian tastes for society and convention were still upheld. In Berlin, Ida met Henry Wilde and the rest became an illustrated book published by Querverlag and exhibited at Create Berlin Series 2007. In 2010 she was invited as Choreographer in Residence at Acco Theater, Israel, where she created, A Natural Environment which then toured throughout Israel. She was featured in Suzanne Delal’s 2010 Dance Festival Machol Acher, and her earlier works, Trained 2007 and On a Faithful Friend 2008, were performed at Machol Acher Dance Festival 2010, IntimaDance Festival 2008, Tzavta Short Theater Festival 2008, International Exposure 2008 and A-Genre Festival 2007. Her Lecture-Performance, October Riots Acco’s Anemone Population premiered at the 15th Annual Performance Studies International Conference in Zagreb, Croatia 2009.

Please, email applications and additional information by November 30, to agon@emanat.si 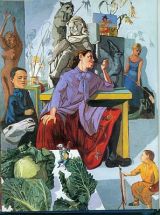