Matija Ferlin set to embark on a European tour with his new production!

Matija Ferlin set to embark on a European tour with his new production!

Choreographer, director and performer Matija Ferlin, together with his collaborators, has recently been having residencies at the Svetvinčenat Mediterranean Dance Center and the Istrian National Theatre - Pula City Theatre in Croatia, where he is preparing for a new performance Sad Sam Matthäus, which will soon embark on a European tour.

After a series of successful projects entitled Sad Sam (directly translated from Croatian as Now I am), the collaborative effort between the dramaturge Goran Ferčec and Matija Ferlin resumes with the stage exploration of the relationship between choreography, speech, narrative and performance, this time entering into a dialogue with Johann Sebastian Bach’s monumental oratory St. Matthew Passion (Matthäus-Passion). The idea for the performance came in 2019 when the artistic director of the Wiener Festwochen (Vienna Festival), curator Christophe Slagmuylder, invited Matija to participate in the 70th edition of the festival, which was later postponed to 2021 due to the COVID-19 pandemic. Staged as a performance for a single performer, Sad Sam Matthäus is potent in its stage hybridity as it establishes a dialogue between the music and the performative, dance and theatre, the canonical and the personal. It expands on the theme of death, suffering, temptation, carnality, the relationship between the individual and the society, betrayal and forgiveness, using the music and narrative structure of the Passion, but also personal narratives and metaphysical explorations of the complicated and harrowing deaths in Ferlin’s family. The wide symbolic corpus established thereby blurs the line between the probable and the impossible, the rational and the intuitive, the invented and the real. Passion can be read and understood today as the universal habitus of time. It is a connecting state, a recognizable sign, a symbol that carries the hope of the world two thousand years old.

After a year-long postponement, the performance will have its prepremiere on June 9 at the Istrian National Theatre in Pula, with premiere and an additional performance on June 23 and 24 at the CND Centre national de la danse as part of the Camping Festival in Paris. The 6th edition of the international choreographic platform Camping this year again becomes an artistic campground offering encounters with artists and opening up poetic experiences of dance, theater, performance and visual arts through various programs of workshops, lectures, performances, film screenings and public presentations.

The tour continues on June 29 and 30 with performances at the Old Power Station in Ljubljana, organized by the Slovenian producer Emanat in cooperation with Bunker, while the performances in Austria will take place from July 9 to 11 at the Jugendstiltheater am Steinhof in the frame of the festival Wiener Festwochen in Vienna. One of the world's most important performing arts festivals, Wiener Festwochen critically and openly explores the wider field of performance by questioning theater as a form in a time when performing media are increasingly opening up to dialogue, exchange of ideas, knowledge and togetherness so as to encompass the complexity of cultural identities around the world. Artistic director Christophe Slagmuylder has announced an inspiring program that centres around the artists and their visions to embrace the unpredictable, broaden perspectives and reaffirm the necessity of the arts to bind a society of humans together. The festival will present some of the most notable contemporary theatre directors, choreographers and composers such as Heiner Goebbels, Tim Etchells, René Pollesch, Toshiki Okada, The Wooster Group, Nature Theater of Oklahoma, Philippe Quesne, Eszter Salamon and others. Although in its previous editions Wiener Festwochen presented Croatian theatre authors such as Oliver Frljić, Bobo Jelčić and Nataša Rajković, the performance Sad Sam Matthäus by Matija Ferlin is the first time that the festival acted as coproducer of a work by a Croatian dance artist.

Matija Ferlin is the multiple award winning author of performances such as Sad Sam Lucky, Sad Sam Almost 6, Nastup – Onformance, We Are Kings Not Humans, Staging a Play: Antigone, Staging a Play: Glass Menagerie, Staging a Play: Tartuffe that have been presented at numerous important international festivals and venues. On the occassion of the upcoming premiere of his new work, Ferlin said: Passion is a metaphysical and philosophical starting point that helps me understand what is happening to our time. On the other hand, it is also the material with which I return to myself, to the intimate re-examination of suffering, its narratives, experiences, fears. It is important for me as a choreographer whose body feels the result of exhaustion through the act of performance, to explore what happens to a body when it can no longer do what is required of it. Besides, there is something lucid in Bach’s attempt to sing the anguish, and equally there is something extremely risky and unpredictable in my own attempt to perform a solo to Bach’s Passion, a solo about myself, my family, time and torment. I am aware that this show is a sequence of risks, a sequence of impossibilities, a sequence of challenges. But I also believe that precisely these kinds of attempts are worthy of artistic research and work. 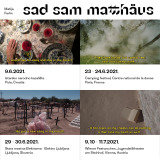