26.02.2015
Experiential Anatomy - through Body Movement and Alignment Theory and Practice.

Integrating body-theory and practice, from a practice-led perspective, movement is experienced and also analysed through exercises involving rest, small movements, touch, and full out dancing, alone, or with a partner, or group. This work is facilitated through the language of physiology, somatic studies and dance. Using improvised and set exercises, physiology, somatic principles, and dance, are intertwined and investigated. The movement investigation looks at links in various dance and somatic practices, and connections, where information from one practice relates to another, specifically and consequentially.

The approach to movement is informed by formal University studies in Dance-Kinesiology, Movement Physiology and Modern Dance, alongside over 20 years of practical and scholarly research in Ideo-Kinesis, Body- Mind Centring, Alexander Technique, Laban-Bartineff, Feldenkrais Method, Contact Improvisation and various “release techniques”. The physical and theoretic work is focused on issues such as body integration and connectivity, mirroring the fascia-muscular-skeletal relationships of various body parts. The work aims for efficient, aware and expressive movement.  These ideas are discussed in numerous practices focused on the integration of the centre and periphery, bodily relationships to gravity and levity, and various spinal and reflexive movement pattern studies.

Vincent Cacialano education is in Modern Dance, studying with Alwin Nikolais, Erick Hawkins, Debra Riley (Dunn), Martha Curtis (Koner) and Chris Burnside (Lewitsky) and dancing in works by Meg Harper (Cunningham) and Sharon Kinney (Taylor). He holds a Master of Fine Arts in Dance emphasizing Composition and Body Movement and Alignment Theory. As an M.F.A. student he was a George Washington University Fellow. He also holds a Bachelor of Fine Arts in Dance and Choreography from Virginia Commonwealth University, including Acting and Voice for Stage. He graduated from both institutions with honors.
He is currently working with Katie Duck in Duck Projects and Dr. Sharon Smith (Gob Squad) in The Blue Stocking Social Club. He has worked as a performer in subsidized projects in The United States, The United Kingdom, Italy, Germany, France and The Netherlands for Susan Rethorst, Thomas Lehman, Ria Higler, Maida Withers, Allesandro Certini, Ctharlotte Zerbey, Katrina Brown, Lesa McLaughlin, Sharron Wyrrick, Anno Dijkstra and Max Factory.
He is a Senior Lecturer and Program Leader at The Manchester Metropolitan University (06) and he is a member of the editorial and advisory board of The Dance and Somatic Practices Journal (08). He has been teaching in Higher Education since 1993. From 1993 - 06 he was a tenured lecturer at The Amsterdam School of The Arts’ School for New Dance Development, Jazz Theatre and Modern Dance Departments. He has been a member of the artistic leadership team of The School for New Dance.
He cofounded Magpie Music Dance Company in 1995 with Katie Duck (Groupo) and Michael Schumacher (Forsythe). Magpie worked as a regularly funded collaborative group touring their critically acclaimed instant compositions throughout the Netherlands a nd in Europe, North and South America, Asia and Australia. Through my affiliation with Magpie I have performed with Steve Paxton, Nancy Stark Smith, Kirstie Simpson, David Zambrano, Pauline DeGroot, Benoit Lachambre, Julian Hamilton, Misha Mingleburg, Andy Moore, Han Benick, Michael Moore and Mary Oliver.

The workshop will take place at PSEGSL / SVŠGL, Kardeljeva ploščad 28 A.

Fee for the 4 day workshop is 65 €.
Please send the applications on praktikum.svsgl@gmail.com.
Enrolments are possible from Monday to Thursday from 6.15 PM untill 8 PM in Pre-School Education and Grammar School Ljubljana, in the dance-theatre hall, Kardeljeva ploščad 28 A, Ljubljana. We kindly ask you to pay the fee before the beginning of the workshop.

Program was proposed in collaboration of two programmes: Agon and Practicum in Contemporary Art 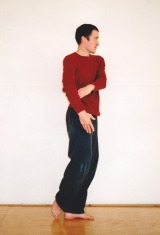