In this workshop shared practices are a site for investigation and encounter between participants.
Here, choreography is an expanded form - a flexible set of tools for time-based and relational interdisciplinary work. The workshop studio becomes a laboratory in which participating artists rigorously test their own systems of assigning value and meaning through and with their bodies. In an unwavering experimental spirit, the work insists on an ethic of collaboration. Practice and theory, research and making, movement and reflection are intertwined activities. Over the course of the workshop participants explore a collection of exercises to produce material and activate questions about the borders between sense and sound and physical gesture and utterance.
The workshop is ideal for practitioners interested in broadening ideas in and around their work, investigating choreography as expanded practice and collaborative interdisciplinary approaches to creation.
Ame Henderson’s work with the Toronto-based company Public Recordings draws on choreographic strategies, embodied action, language, sound, objects, framing and architectural space to create a shared language for live performance.

Ame Henderson grew up on Vancouver Island and now lives in Toronto where she is the Artistic Director of Public Recordings an atelier for choreographic experimentation. Committed to collaborative working structures both aesthetically and politically, she maintains ongoing collaborations with artists from across disciplines and continents. Henderson received a BFA from Concordia University (Montreal) and continued her studies at The School for New Dance Development (Amsterdam). Henderson holds an MFA from the Amsterdam School for the Arts where her research focused on the political implications of the synchronous gesture and its potential as a collaboratively authored improvisatory practice of togetherness. With her collaborators, Henderson has created the works Blue* *Disco (2003), memories and statements (2004), Manual for Incidence (2005), The Instruction Project (2006-07), /Dance/Songs/ (2006), relay (2010), 300 TAPES (2010) and Open Field Study (all together now) a durational, site-specific choreography for 50 performers created for Nuit Blanche Toronto 2007. In 2012, she created a one-night performance concert with Buck 65 for Summerworks. Henderson’s performance works continue to be researched and performed at home, across Canada and internationally.  She has developed work in residence at TPW R&D, Harbourfront Centre, Tanz Quartier Vienna, Dance4 (Nottingham, UK), Le Groupe Dance Lab (Ottawa), and OBORO, Studio 303 and Tangente (Montreal). She has collaborated as a performer with Tino Sehgal, Fiona Banner, and Small Wooden Shoe and her duets ROOM with Tedd Robinson and The Most Together We’ve Ever Been with Matija Ferlin, both continue to tour. Henderson was the guest curator for HATCH 2010-11 at Harbourfront Centre and a facilitator for Interrarium 2011 at the Banff Centre for the Arts. In 2012, she was a sessional lecturer in the Faculty of Creative and Critical Studies at the University of British Columbia. Her most recent project what we are saying premiered at The Power Plant during Harbourfront Centre’s World Stage, Toronto in May 2013.

The workshop is open for choreographers, dancers, performers and people with stage experience, not necessarily only with dance background.
All interested parties are asked to submit upon application a short description of their work activities. Number of participants is limited. Application criteria are regular attendance on both days of the workshop.
Please, email applications and additional information by March 12th to agon@emanat.si

Organization: Emanat in collaboration with Dance Theatre Ljubljana
Financially supported by Ministry for Culture of Republic of Slovenia, Municipality of Ljubljana - Department for Culture, Canada Council for the Arts and Public Recordings 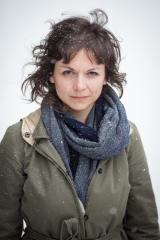