Butoh is an art form that has its origins in Japan in the 1950s. It was part of a very radical postwar movement that resisted traditional values in art as well as in society as a whole, attempting to break down some deeply seated cultural taboos. During the 1980s, butoh spread to the United States and Europe, while the Slovenian public came to know this art form through the pioneering work of butoh dancer Tanja Zgonc. The meaning of the tautology cited in the beginning, butoh is butoh, will be tackled from the perspective of Zgonc’ 28 years of experience as choreographer, dancer, and teacher. Compared to the mindset based on the duality of mind and body, butoh is an art practice that sees thought in the body. What is offered by this radical practice is primarily the potential of facing risks of own failure. Namely, if its result is not a collapse of the self-alienated codification of the spectator, the dance – that aims to be butoh – necessarily fails. Through the unveiling of choreographic practices of one of the most recognised and appreciated Slovenian contemporary dance makers, the discussion will also touch upon the subtle relations between butoh and dance.

Tanja Zgonc has been creative as choreographer and dancer for 40  years and has been widely recognized on the dance scene at home and worldwide. She created 21 dance shows and received numerous awards: Yugoslav alternative actress (1989), Zlata ptica/Golden Bird (1992), Zlata paličica/Golden Stick (1994), nagrado Prešernovega sklada/ Prešeren's Fund Award (2002) for performance Kagami Reflection in nagrado Povodni mož / Triton Prize for the best performance selected by the critics (2002) for performance Koora. She danced in successful shows of Plesni Teater Ljubljana / Dance Theatre Ljubljana, collaborated with Studio for Free Dance Ljubljana and ten years and Pantomime Studio. She worked with numerous acknowledged theatre directors in Slovenia and abroad and created choreographies/ theatre movement in more than ninety theatre plays. Recently, she has been acting as profesor for movement at the Academy for Theatre, Directing, Film and Television in Ljubljana for several years.
She got acquainted with Butoh 28 years ago becoming a member of Ko Murobushi's International Butoh Dance Company founded in Köln. Later on she also collaborated with companies In-Out (Germany) and Su-En Butoh (Sweden). She has gained further skills in Japanese Butoh with leading masters such as Kazuo Ohno, Yoshito Ohno, Ko Murobushi, Tadashi Endo, Carlotta Ikeda and Min Tanaka.
Tanja Zgonc is choreographer Butohist who, through transformation of various dance techniques and movement methods by using the methodology of Butoh, has developed her very systematics and authorial principle of movement, above all the back. In the latter years acting as leading lecturer she conducts creative workshops with the method of Butoh in her own specific language around the world.

Magdalena Germek graduated from philosophy at the Faculty of Philosophy in Novi Sad, Serbia. She is currently working on her doctoral thesis from philosophy at the Postgraduate School ZRC SAZU in Ljubljana. Building on ontology, she is exploring the inner logic of manifestation in itself and the outer manifestation of logic as such. She is also participating in the programme School for Curatorial Practices and Critical Writing – World of Art. Germek is collaborating with different makers from the visual, theatre, dance, and literary field. 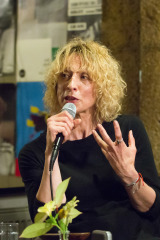