THREE bitches, TWO planets, ONE rocket is a dance-theater performance by Urška Vohar and in collaboration with the award-winning playwright Simona Semenič. The play takes viewers into a reality show in which three Earthlings fly a rocket to Mars with the aim of creating a new and better society. There, they begin to face both physical problems, such as a change in gravity, as well as issues of social order in a world where rules have not (yet) been written. The play humorously but critically draws attention to the problems facing modern society. 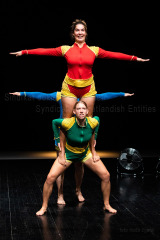