The idea for the project was born during the work with dance students on SEAD in Salzburg, Austria, where the choreographer Matej Kejzar started to look for his Little Red Riding Hood.
After the setup of principle guidelines choreographer Kejzar started to work with artists such as Willy Prager, Stephan A. Sthereff, Mirjam Klebel and Marjan Stanic and during their work the modern interpretation of Little Red Riding Hood was born, many times described also as the project To see you better.
The main story is focusing on the fairytale Little Red Riding Hood and its interpretation of Bruno Betlehaim. Political and sexual aspects are the main research venues in the project. The idea of the transformation and the transformed individual are the key moments of the concept. Themes like love, fear, possession, aggression, hate, curiosity are dealt with to provoke and create the image of modern individual. The power of human emotion, lucidity and the world of fantasy are creating the story which we could also describe as modern rock opera. Because the transformation is leading character of creation, the performers will switch their roles the same way as the miracle is interrupting into the reality. The main goal is to create a performance with all possible elements of human expression, such as singing, opera, dancing, acting and live music.
Because all of the fairytales have a happy ending, this is a story which never ends and concludes its final act with infinite repetition. (Alja Adam ) 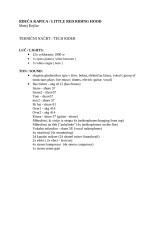