On this years last release date, the local DJ and producer Zergon will demonstrate his new gear live at Kino Šiška. The EP DOLOS, inspired by the Greek god of trickery and concrete geometrical structures to prevent high sea rise, presents Zergon’s next chapter in his research of broken acid techno with analogue and modular gear. Supporting him will be the electronic music composer Peter Jenko (Timequake, Moringa, Chilli Space, Colours).

Zergon (Aleš Hieng) is a DJ, music producer of electronic music and sound artist from Ljubljana, who also works in the field of audiovisual performances and in the vast field of DIY electronics.. He is interested in club music as well as in sonic explorations and audio-visual experimentations. His sound ranges from deep-house and techno to IDM, experimental electronics, noise and abstract drone. His musical performances are based on improvisation – live programming of rhythmic patterns, melodic sequences, sound design, playing effects, and mixing everything with field recordings. He collaborated with the artist Robertina Šebjanič on the audio-visual project echo 10-9. He is the co-author of the ongoing sound-chemical installation Time Displacement – Chemobrionic Garden in collaboration with Robertina Šebjanič and Ida Hiršenfelder, which was exhibited in 2016 at the Ars Electronica festival in Linz, as part of the exhibition Radical Atoms. He is also the co-author of the sound installation Sound Disposition – Crystal Gardens with the mentioned artists.

Peter Jenko is an electronic music composer from Ljubljana who is active in the groups Timequake and Moringa. He is known for his experimental approach, researching the relation between loop and sequence, digital and analogue, natural and artificial. He believes in the enourmous didactic potential of electronic music in teaching music as well as other arts and sciences. The sound of his sequencers and rhythm machines is distinguished by a combination of modular, analogue and digital synthesizers he has been collecting and assembling through the years. 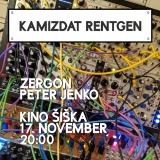