Million Ear is a formation created in Rotterdam that embeds lyrics and poetry in soundscapes that blend Rap, Rock, and Jazz with ambient, avant-garde, and noise elements in a constantly changing, freely improvised musical setting.

The band draws inspiration from artists that have set words with philosophical and political content to live music in the past and the present, as well as from musical traditions of spontaneous improvised expression. Influences range from Gil Scott Heron, One Day as a Lion, The Robert Glasper Experiment, Clipping., and others, but with the element of a musical landscape that is always improvised and in an interplay with the lyrics. As a result, no two of the band's performances are ever the same.

The band consists of Filippos Glinavos on guitar and playing with words and Rok Zalokar on keyboards, who are joined by different drummers. At this performance drumming duties are being taken over by Andro Manzoni. while visuals are taken care of by Matic Skušek. 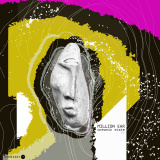