Natalka Polovynka (UA): The Voice of the Performer

03.09.2011
For singers/vocalists, dancers, actors, performers, and all interested in vocal expression in connection to theatre and folk tradition

Natalka Polovynka is a singer, actress, pedagogue, and the art director of Maisternia Pisni Art Centre. By means of theatre and music Natalka Polovynka creates a unique artistic territory of song development as a category of life, as a spiritual category.  Natalka Polovynka presents traditional singing in all its genres: ancient sacred songs of Ukraine, traditional Ukrainian song, chants, psalms, Ukrainian classical romance. Natalka is also a performer of contemporary academic music and contemporary improvisational music.

She has graduated from Lviv State M.V. Lysenko Conservatoire (class of Prof M.P. Tarnavetska). She has participated in the workshops of the Jerzy Grotowski Workcenter in Potedera (Italy). From 1988 to 2007 she was the principal actress and musical director of the Lviv Les Kurbas Theatre. In 2003 she co-founded together with Sergiy Kovalevich Maisternia Pisni Art Centre and became its art director. Since 2008 she is the soloist and pedagogue at the Lviv State Male Choir Dudaryk.

Natalka Polovynka is the author of numerous musical and theatrical projects, such as They are coming, Homo Ludens, The Well, Irmos, Sobor, Flower-fiancée, The message of Summer, After Christmas, and Wedding, and the author of a unique methodology of working with the voice. She has given voice and singing workshops at the Universities of Columbia, Pennsylvania (USA), University of Wales (Great Britain), Atelier of the International Jerzy Grotowsky Institute (Poland). She regularly cooperates with the International Jerzy Grotowsky Institute (Poland), the Academy of Guardians (Moscow, Russia), State Male Choir Dudaryk (Lviv, Ukraine), and State Men’s M.Revutskyj Choir (Kiev), and with the musicians Bogdana Frolyak, Alla Zagaykevych, Jerzy Jermin, Yaroslav Mygal, Klaus Kugel, Petras Vysniauskas, and others.

Her work has been awarded in numerous international musical and theatrical festivals. She is the Laureate of T.G. Shevchenko National Prize, the highest Ukrainian award for artistic achievements.

and a DVD:
• On Sunday Morning (Fragments from the performance, film, 2009)

Students, seniors = 20 EUR
Reduced price for 5 or more members of choirs and other groups = 20 EUR per person 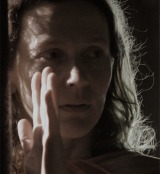