07.12.2009
This is an ongoing training workshop for actors, dancers and performers that offers a space for performers to train physically and improvise on a regular basis in a group, and to develop performance ideas.

The rigorous physical training forms will be based on Grotowski work and the work of the Iowa Theater Lab. Designed to open up the performer’s body to physical and vocal impulses and to provide containers for those impulses, performers will work with rigorous muscle, body and movement forms and with vocal resonators in order to bridge the gap between impulse and expression.

Improvisational structures will be based in Viewpoints training to develop the performer’s capacity to play with relationships of space, time and the body in their performance work.

Each session will begin with physical training, move into group improvisation training, and then will move into compositional/staging work. This last phase will offer a space for participating performers to develop ideas with one another, both individually and as an ensemble. This may include scene work, movement choreography, text-work and play workshopping.

Participants are encouraged to bring in work they would like to develop. All levels of performance experience are welcome. Please dress comfortably and be prepared to move.

Eric Dean Scott is an actor, writer, director and performer from New York City. He completed his theater training at the Experimental Theater Wing at New York University. There he trained in techniques based on the physical and experimental theater movements coming out of the 60s and 70s: he studied actor training in the theater work and ideas of Jerzy Grotowski with teachers Ryzsard Cieslak (lead actor of Grotowski's Polish Theater Lab) and Kevin Kuhlke (Iowa Theater Lab) and Saskia Hegt (actor, Richard Schechner's Performance Group); he studied Six Viewpoints training with dancer Mary Overlie; and he studied vocals and singing with Jonathan Hart (Roy Hart Theater). After his ETW training, Eric also trained at the William Esper Studio, where he studied the Meisner Technique for two years, and at The Actors Center in NYC, where he continued his studies in Mask, Physical Theater, Games/Improvisation, Alexander Technique. There he also studied Acting and Scene Work with the legendary director Lloyd Richards (A Raisin in the Sun), also for two years. Since completing his training at ETW, he has been making theater in the downtown New York experimental theater scene and has been a founding/associate member of a number of theater groups: Gorilla Repertory Theater company, bringing highly physical, outdoor performances of Shakespeare to the public in parks and other public sites since 1991; International WOW Company, creating large cast performances/spectacles at site specific venues throughout New York City; The Faux-Real Theater Company, bringing theater to children in Central Park, and WaxFactory, an internationally based multi-media theater company, among others. He has worked with Obie-award winning theater-makers Richard Maxwell, Jeff Weiss (in his late-night burlesque/cabaret series Hot Keys / Come Clean), Stacy Dawson, and most recently, with Jay Scheib, in work integrating video and cinematic values into live play performances using onstage camera techniques and mixing split-screen live feed images into the dramaturgy of performances. In his original performances pieces, such as tales from bordertown (vol. II) and his performances of Allen Ginsberg's HOWL!, he combines his physical theater/impulse work with traditional storytelling modes of oral (epic) poetry. 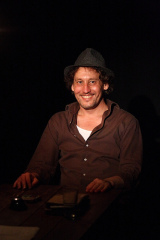