Ten years of contemporary art, ten years of music. As part of its artistic projects, JAŠA has always actively included music as an integral part of the overall experience of artistic work. From the beginnings with the punk project Revenge (Miha Zbašnik, Aljoša Cetinski) to the groundbreaking concert performance from the roof of the Modern Gallery for the opening of U3 in 2010, when a band called Leftfinger (Janez Vidrih aka Junzi, KALU) and their early project Earlyear. During The Lovest project period in the Moderna galerija (where the duo Your Gay Thoughts was formed at the time), Luka Uršič first established himself as an autonomous and excellent musician KALU, with whom he and JAŠA created Bloom, the first serious sound composition which JAŠA included in his performance. The latter was presented in 2011 as his solo project at the Geraldine Zodo Gallery in Milan (which represented the artist until 2012, when he transferred to the On Stellar Rays Gallery, New York).

In 2013, after the completion of JAŠA's project The Lovest (which lasted three years in the basement of the Modern Gallery), the boys released the studio album White Rooms as Leftfinger. In 2012, Tine Grgurevič (BOWRAIN) made his debut as part of The Lovest event with the band at the time. This was followed by years of extremely intertwined and fruitful creative collaboration on the international stage in the context of contemporary art and mostly independent JAŠA projects; Apnea's Rhapsody, On Stellar Rays, New York, 2012 (first solo exhibition of Jaša in NY) until UTTER_the violent neccessety for the embodied presence of hope, with which JAŠA represented Slovenia in 2015 at the 56th Venice Biennale with a monumental installation and seven months an ongoing performance for which music was written and set to music by BOWRAIN. BLOOM is a summary of hitherto unreleased individual compositions and sound and music sets created between 2012 and 2020.

Free streaming, downloads (name your price) and limited edition USBs are available through our Bandcamp shop kamizdat.bandcamp.com and all other standard digital outlets.

Financially supported by City of Ljubljana 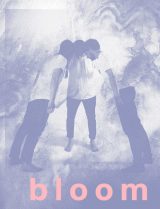