Kamizdat is proud to welcome multitalented singer/songwriter and pop experimentalist Lasse Passage in Ljubljana again after few years. He is curently touring Europe in anticipation of the release of his third full-length album “Sunwards”. For this solo-show, Lasse Passage will be lo-fi crooning with a cassette player, performing parts of his material from “Stop Making Sense and Start Making Success” - and we’ll also be getting an acoustic sneak-peak of the unreleased and brand new songs from “Sunwards”. It’s a multi-layered musical journey, where the subject of love is treated with black humor and cynic melancholia, which remains refreshing and highly accessible throughout.

Warming up for Lasse's sunny confession will be provided by Tovariš Strmoglavljen, which is a: "Self-summoning form on the mosaic of human stupidity. It is improvised but content-designed and structured, each time a little different, spontaneous, sometimes without a tail and head, and allows itself to" travel to unrecognizable worlds "and to be influenced by current circumstances. It is always alive, moving and changeable. by finding a common path and harmony with the range of instruments. "

Kindly invited towards the sun!

█LASSE PASSAGE█
Composer and recording artist Lasse Passage started studying composition at Griegakademiet in Bergen and went on to complete a BA in Sonology from the Royal Conservatiore in The Hague. His compositional work is coloured by the electroacoustics and the rhythmical music but take shape through different mediums and expressions; acousmatic pieces, consept-based, sound installations, lo-fi electronics and alternative pop-music. This versatile approach has also brought him to be a frequent collaborator in the independed scene of dance and theater. Commissions in the recent years include a.o. percussion ensemble SISU, chamber group Alpaca, solo works for Kristine Tjøgersen and Ole-Martin Hauser and the acousmatic piece “Hei!” which was selected for the New York Electroacoustic Music Festival in 2017. As a songwriter, his previous record “Stop Making Sense and Start Making Success” is being followed up in 2019 with the release of a new album titeled "Sunwards".
https://www.lassepassage.com/

█TOVARIŠ STRMOGLAVLJEN█
Tovariš Strmoglavljen is the nickname of Martin Ukmar, the silent protagonist of an unconventional, quasi-existing music wave, called by the proponents "The New Strange Slovenia". It is a one-man band project of unprecedented proportions, which you definitely need to get to know if you love expressive music. He has been involved in various projects (Kislu grozdje, Bržjast, Kraški solisti) and is a hunter of sound antistructures in folk and blues, which he usually catches by turning intonations and melodies; He usually adds a layer of strings, a plethora of percussion, and his voice, which always seems a bit cluttered because of the message being conveyed. Over the years, Nastja Janžekovič, Samo Pavlica - Linč and Martin Jogan joined him in creating the music as well as on the stage.
BandCamp: https://tovaristrmoglavljen.bandcamp.com/

Kamizdat releases and concert event series ▂Kamizdat Rentgen▂ in production of zavod Emanat are in collaboration with Ljubljana venues: Kavarna Pritličje, ŠKUC, Škuc Gallery, KUD Channel Zero, and with financial support of Minicipality of Ljubljana and Ministry of culture RS. 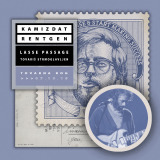