In the context of Slovene performing arts practice the series of dance theatre performances by choreographer, dancer, and dance pedagogue Maja Delak presents an elaborated artistic achievement which in a condensed way crystallises the exceptional quality and uniqueness of her dance and choreographic creativity. At the same time it also presents one of the most authentic and powerful artistic self-reflections of the artist’s position in contemporary society.

The performances Expensive Darlings, Serata Artistica Giovanile, and Ways of Love each in its own way and by way of incredible cohesiveness and mastering of different media combine the uniqueness of Delak’s artistic and wider professional activity and her often pioneering engagement in the field of contemporary dance. Here we are not dealing only with formal aesthetic excellence and invention of her creations and the development of her specific poetics, but with an exceptionally comprehensively expressed artistic articulation of the politics of contemporary dance, so rarely seen in Slovene space. Namely, a reflection of social and political context, an indirect addressing of the spectator in an autopoetic feedback loop between the stage and the auditorium with a story about the body between abstraction, expression, sensibility, and rhetoric of movement.

Delak’s most recent three performances reflect – always in a new way – contemporary dance and contemporary civilization in the contours of creation. Starting with the performance Expensive Darlings which speaks “about the struggle for art as an individual ethical position (with all that goes with it, the good, the bad, pleasant, painful, etc.), in one of the most engaged Slovene performances in recent years” (Mojca Kumerdej). To Serata Artistica Giovanile, in which Delak enters a creative dialogue with the avantgarde, taking as the starting point expressionist piano compositions Bagatellas by the Slovene composer Marij Kogoj, which are full of fragments and complex dynamics, while also drawing on a representative of Slovene historical avantgarde Ferdo Delak and his project Serata Artistica Giovanile, which he understood as “a choreographical sketch about stage life” and which was staged in Gorizia in 1926. In a dialogue with historical avantgarde, Delak thus stages seven dynamic landscapes which simultaneously research the modes of corporeal articulations and the imprints the political leaves on the body itself. To Ways of Love, in which the sign does not reflect reality but bends and breaks it, while the stage becomes an unfixed map of the breaks of this reality.

When asked “How is your project influenced by the word/the literary, compared to movement and the visual?” (interview with Jelka Šutej Adamič in Delo newspaper), Delak answers: The word – written, spoken, or only as an inspiration – transferred to another medium, has always been an important part of my projects. To mention only the performance Gina & Miovanni, which was based on Mina Loy’s poetry, or Properly Blond, a performance based on Eugenides’ novel The Virgin Suicides… Such an inspiration means a lot to me. However, I don’t search for performing the text as such, instead I’m interested in the contents triggered by these texts in my collaborators when they are preparing a testing ground, within which we search for how to perform a selected theme.

Here Delak highlights one of the most important qualities of her recent opus, i.e. the fact which Mikhail Bakhtin defines with the syntagm “the sign is not just a part of reality but a reflection and refraction of reality”. Criteria of ideological assessment (lie, truth, right, just, good etc.) can thus be applied to every sign. It can be seen in Maja Delak’s new performances that they are grounded in a search, research, and constitution of a specific performance language, which arises from their authors entering team work which becomes possible precisely because of the different formal predispositions of the collaborators.

Performance signs that thus emerge are refractions of reality, emerging from contacts, connections, and reflections of different media both in the working process as well as in the performance’s reception, when an especially intensive loop of autopoetic feedback between the performers and the audience arises. Maja Delak namely already proceeds to work from the idea about “the impossibility of a conscious articulation of internal nodes and forces” and from a simultaneous unfeasibility to avoid the fact that every sign is necessarily subjected to the criteria of a series of ideological assessments, which give us the grounds for its interpretation and our adoption of contradictory positions towards it. Instead of purification through violence – an answer exceedingly offered by contemporary art, the theatre of blood and sperm for example, plus a large part of mediated art – Delak opts for what she calls “purification through laughter and a self-ironical perspective on the roles we play”.

In her performances, Delak thus plays with and traverses the roles given by the convention of gender, social status, status of the artist, as well as a whole series of apparent self-evidences defined by judgments and prejudice, which the performers on stage deconstruct, pulling their self-evident ground out from under their feet. Thus, a playful, trans-medial and trans-ideological performance emerges which builds its strength from a series of alienations and surprises, composing an unusual and fresh, often distinctly subversive tissue, which creates a special politics of the performance.

Relevancy and a surplus value of Maja Delak’s dance universe lies in her inventive artistic language, which speaks also about something that is in the Slovene space an exception rather than the rule: about the politics of gender, about the position of women in cultural, social, and political context of contemporary dance and art in general in Slovenia, while in the space-time of the performances, which arise both from movement and mental material, connecting oppositions between the external and the internal, the masculine and the feminine, the public and the intimate, and the omnipresence of the society of the spectacle.

The success and relevancy of the mentioned performances by Maja Delak, which were exceptionally well received both at home and abroad (which is an exceptional achievement for Slovene contemporary dance) is by all means an opportunity to acknowledge her exceptional creativity with a Prešeren Foundation Award and thus crown her exceptional artistic and cultural contribution to Slovene dance, self-reflection of dance, dance pedagogy, art, and culture at large.

As its President and with the support of the Contemporary Dance Association Slovenia I propose choreographer and dancer Maja Delak for the Prešeren Foundation Award to acknowledge her exceptional artistic achievement – the artistic opus of performances Expensive Darlings (October 2007), Serata Artistica Giovanile (2008), and Ways of Love (2009) and for her accomplished and multifaceted artistic creativity, pedagogical work, and efforts for the affirmation of contemporary dance in Slovenia.

Besides her artistic achievements Delak’s active, engaged, and constitutive activity for the affirmation of contemporary dance in Slovenia presents an important foundation for the art of dance in Slovenia. Thus, the Association proposes Delak as the candidate for the Prešeren Foundation Award, since her artistic and professional activity confirms the fact that the society and the Slovene space is formed first through cultural and artistic creativity.

The beginnings of Delak’s artistic as well as constitutive activity in this area are connected with the founding of one of the more important groups of Slovene contemporary dance, namely En-Knap, which significantly contributed to the dynamic world dance development in the nineties and already then showed that Slovene contemporary dance presents the very artistic discipline which is importantly bound to European currents and recognized as their constituent part. Starting her independent artistic work in the field of contemporary dance in 1995 with the performance Manifestation of the Introvert, Maja Delak created thirteen dance performances in the past fourteen years. Besides the mentioned also Gina and Miovanni (1999), 6agon (2001), Mezzanino (2002), Properly Blond (with Mala Kline, 2004), Rondinella (with M. Kline, 2004), Hi-Res (with Mala Kline, 2004), Gallery of Dead Women (with Mala Kline, 2005), Rodeo (2007), Expensive Darlings (2007), Serata Artistica Giovanile (2008), and Ways of Love (with Luka Prinčič, 2009). The quality of these performances lies in a diverse set of their themes, in the invention of a unique and clearly articulated working methodology, and in relevant concepts and execution of performances, which invariably open up precision and lyricism of dance poetics to broader, general, and topical contexts. Further, Delak is also initiator and one of the main coordinators of the realization of the secondary level artistic programme for contemporary dance (realized at the Pre-School Education and Grammar School, Ljubljana since 1999), co-founder of the non-formal educational programme Agon and of the book series Transitions (intended to publishing original works and translations from the areas intertwined with dance in different, also potential ways and which could disseminate dance related themes also to other areas and vice versa, while establishing connecting elements which could exist also in dance), and the founder of Emanat Institute, which aims to affirm contemporary dance art as a topical, live field of artistic creativity, developing the area also through establishing different structures and modes of activity with which dance enacts and develops its creative structures.

Artist Maja Delak is thus not only distinguished for her engagement bound to her creative growth as an artist – and of course the growth of her numerous collaborators (where her work with younger, developing artists is of key importance) – but also for her active, selfless, and constructive work in the contemporary dance field and art in general. Her creative work consequently not only puts artistic achievements on the Slovene and European map of art and culture but, because of her social awareness, also constitutes anchorages and cores of art as a relevant human and civilization practice.

In the attachment: expert proposal justification by Tomaž Toporišič PhD, detailed information about performances Expensive Darlings, Serata Artistica Giovanile, and Ways of Love and about the artist’s work with selected archive documentation. 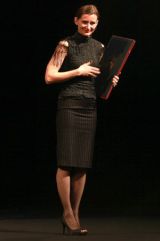 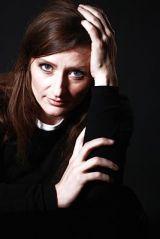