The Thinking Body can be, without exaggeration, described as one of the 20th century's milestone works, and as the first interdisciplinary study on movement biomechanichs, that initiated development of many methods, techniques and approaches in the field of somatic practices. Mabel E. Todd succeeded, with her far-reaching ideas, to inform academic community and broader circle of practitioners, performers and pedagogues in the fields of sports, physical education, rhythmics, dance and play.

Mabel E. Todd (1880–1956), teacher and mentor, raised in Syracuse, New York State. After trouble with kidneys in her childhood and unfortunate fall in her twenties she has from her early ages on been focused on searching movement techniques with which she would make her life and moving easier and in order to pursue her further education. Knowledge in motor development, anatomy and movement apparatus that she firstly needed for herself, later on disseminated as a mentor in her Natural posture studio and in the study The Thinking Body, originally published in 1937. Her study still remains a classic work in the field of dance literature at dance schools and academies.

You can pre-order the classical work by Mabel E. Todd The Thinking Body (2014), translated by Urban Belina, via info@emanat.si until the 31st December 2014 and get a pre-order discount (15 € + shipping costs). 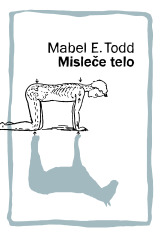