In her newest project Irena Tomažin uses the medium of voice and body as her tool(s) to tackle the themes of tradition, heritage and the status of voice(s) and images, which voice as a medium of oral tradition is carrying on, from one generation to the next.

The Other At The Same Time (by Matija Ferlin) and Shame (by Maja Delak) at the Moving Cake Festival - Slovenian contemporary dance platform in Ljubljana:

Shame speaks through many languages. The bodies, the sounds, the music, images, and words speak out at the same time. What they want to tell lies in the overlaps and gaps between individual languages. They speak about the subjects on stage and the subjects in front of it in a way that like the subjects evades an unambiguous signification: with stillness, delays, interruptions, twists, hesitations, duplications, echoes.

Matija Ferlin: The Other At The Same Time

The other at the same time is an experimental dance project based on a system researched in first group piece created by choreographer Matija Ferlin called Onformance. The intention of this project is to expand movement research and include the originality that written play brings once has been performed in relationship with the specific researched movement. Such principle evokes novelty for play-writers as well as for performers.

Resistance started as a clubbing derivative of multimedia concert performance Frozen Images. It premiered at UltraWax event in klub K4. It is a move towards the transcendence of a dancefloor, especially of its potential of conscious and deliberate bodily resistance to the force of rationality. It uses a language of electronic rhythms, repetitive patterns of metalic melody, violent funk and carefuly crafted dynamics of suspense, peaks and minimalism. Away from the spectacle it reaches closer to sweaty bodies in darkness.

Claudia Fancello workshop "Let's Do It" and "Morning classes" between 1st and 7th February - more informations and application on agon@emanat.si 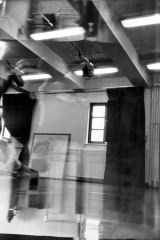