Co-voicings / Srečevanja glasov on the route Sarajevo-Novi Sad-Wroclaw-Ljubljana
Co-vocings, Emanat's international partner project is — after successful presentation of Irena Tomažin in co-operation with Grotowski Institute (Wroclaw, PL) — returning back to Ljubljana. The last but one stop in Poland was also a research field: Irena Tomažin presented her last solo project The Taste of Silence Always Resonates that was accompanied by video A Meeting with Natalka Polovynka. Also this time the author gave lessons, namely she was leading the workshop To Hear a Body. As a long-time attendant of voice, movement and performance workshops at the Grotowski Institute, Tomažin received excellent response after her last presentation. Also during the end talk, that followed the intensive three-day programme in the beginning of February.

The last stop: Ljubljana
One-year project is bound to finish in the end of March with a four-day Co-voicings programme in Cankarjev dom with various accompanying events (workshops, talks with guests, gatherings). The project that captured broader context of different cultures and traditions of folk singing will be accompanied by Damir Imamović, propulsive sevdah singer of younger generation from Sarajevo, and Svetlana Spajić, an artist from Serbia and established researcher and singer of traditional songs from the Balkans.

The project’s realisation that researches traditional singing and folk tradition together with contemporary art practices is supported by the European Cultural Foundation (ECF) and is carried out together with the organisation Crvena (Sarajevo, BIH) and Instytut im. Jerzego Grotowskiego (Wroclaw, PL) and Ogledalo-INTERZONE (Novi Sad, SRB). 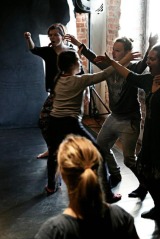