Our guests will be Svetlana Spajić, the talk will be moderated by Boštjan Narat (Katalena). Svetlana Spajić works as performers and authors in the field of traditional folk singing and music, but at the same time she frequently performs on contemporary theatre and concert stages. We will talk about his work, dissemination of traditional art practices and learning about heritage.

Because it might seem to some that intertwining contemporary performing art practices with traditional folk songs is a futile attempt – they supposedly belong to very different worlds of time and space, so it doesn’t make much sense to look for common grounds for the danger drawing too general a and vague a conclusions. However, the focus on (re-)thinking what these two worlds do have to say to each other, how, on some level at least, they are drawing from and uncovering each other, is worth the thought. 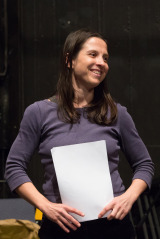