METHODOLOGIES OF NOTATION: Sinja Ožbolt
My body. And empty space. /Silence./ So it begins.
In this edition of Methodologies of Notation, dancer, teacher, and choreographer Sinja Ožbolt and dramaturg and playwright Saška Rakef pursue The Lost Performance. Sinja's first and never realised performance. Fragments of which are part of over 15 Sinja's performances. In curved lines. With interruptions. As eros thanatos. As a DNA double helix. As reflection of the fragmented personality of modernity. Which always holds a story. As the shortest distance between man and truth.

Saša Rakef studied Performance Arts at the Central School of Speech and Drama in London and is currently completing her postgraduate studies at the Academy of Theatre, Radio, Film and Television in Ljubljana. Her plays have been presented at festivals, such as The Camden Fringe Festival, Roundhouse, London; International Multimedia Festival Patos(off)iranje, Serbia; The Accidental Festival, London; Interplay Europe, Liechtenstein; European Dreams Festival, NY; Week of Slovenian Drama, and Maribor Theatre Festival; and published in different journals and magazines, such as Dialogi, Mentor, and Sodobnost. Her most notable achievements are the nomination of her play Dom (Home) for the Grum Award (best new Slovenian play), the Branislav B Čubrilović Award at the International Multimedia Festival in Serbia, and entrance to two prestigious radio drama festivals Grand Prix Italy and Nova International Radio Drama Festival Bucharest with Ivana Sajko's play Woman Bomb (adaptation and dramaturgy). She is member of Radio Slovenia's culture programme. 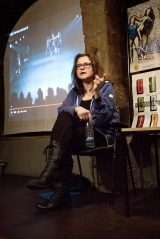