The second event in a series of talks on choreographic practices will be devoted to Irena Tomažin, an artist of a younger generation who has created an artistically distinguishable and unique opus. Her diverse creativity is usually summed up as „choreography of voice”, which, while being caught between tradition and performative present, perhaps fits best into what is described as the ephemeral nature of dance. The event is conceived as a „covoicing” talk, which is also the title of the latest book Irena has edited and  developed conceptually.

Nika Leskovšek works in culture as a freelancer, she is a practical dramaturg and theorist.She is involved in contemporary performance art in all its forms, be it in theory or practice.
​She regularly contributes to Maska, Dnevnik, Sodobnost and other journals and magazines. Currently she holds a Taras Kermauner Foundation Fellowship. In 2013 Leskovšek and the creative team of the performance Vaje iz Tesnobe (directed by J. A. Vojevec) received the Borštnik Award for collective achievement . Her current preoccupation is coincidences, which is also the subject of her diploma thesis. 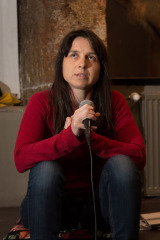