15.06.2016
on how to think seriality as a procedural practice within conceptual network

NOTATING THE CLASHES OF LANGUAGE AND BODY: Bara Kolenc is philosopher and artist with over a decade and a half of experience in making theatre and dance. She has been focusing on the relation between language and body, firstly by researching the language of performance, in each instance conditioned by specific circumstances and working conditions, which in her work does not end up suspended in a fixed matrix, aesthetics, or language, but is, on the contrary, abandoned and developed at the same time. And secondly, by addressing the relation between thought and theatre; namely, how philosophy is pushing the limits of theatre and how theatre is stretching out thought itself. And since her philosophy is the philosophy of repetition, she is at the same time also opening up the question of the substance of theatre, which is not durational in the sense of the artistic artefact, that’s why it needs to be repeated endlessly. How to think seriality as a procedural practice within this conceptual network? What is being repeated, what lost and what is emerging?

Bara Kolenc is an artist and philosopher, based in Ljubljana. She holds a PhD from philosophy and has graduated from philosophy and comparative literature at the Faculty of Arts, University of Ljubljana. She is the author of the recently published book Repetition and Performance: Kierkegaard, psychoanalysis, theatre, published by Analecta Publishing and Society for Theoretical Psychoanalysis, Ljubljana.
Shaped by extensive training in classical and contemporary dance, Kolenc has thus far created 15 evening length performances (among the latter are Metamorphoses 3: Rhetoric, Kino Šiška, 2015; Metamorphoses 2: Paradise Lost, Old Power Station, 2014; Metamorphoses 1: The Hunt, Kino Šiška, 2011; Atelier, Old Power Station, 2008) and numerous solo performances, performative actions, installations, lectures, and lecture performances. She is the founder of two art collectives, the Threshold and the O-jej collectives. She is active also in the areas of literature and visual and video art. She has presented her work across Europe and globally, and received many professional awards and prizes.

Alja Lobnik is a doctoral student at the interdisciplinary programme The Humanities and Social Sciences – Cultural Studies at the Faculty of Social Sciences in Ljubljana, interested primarily in the relation between contemporary performing practices and production of text. She is a regular contributor and critic for Radio Student's Department for Culture and Humanities. She was the cultural editor of Studio City broadcast at Television Slovenia. In 2016 she has been organizing a theatre seminar Sic!, reflecting on the various phenomena of contemporary performing arts, with a focus on contemporary dance, in collaboration with the Department for Culture and Humanities and KUD Anarhiv. In 2015 she has joined the platform Nagib on Stage, where she is creating broadcasts, giving lectures and moderating discussions. She is a member of the Association of Theatre Critics and Researchers of Slovenia. 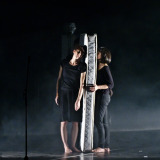