08.10.2016
This workshop proposes a discussion around architectures for dwelling and practice, an inclusive methodology that locates ways in which we begin to navigate the un-governability of all elements and potentially disruptive information associated with the maintenance of juxtaposing energies.

This workshop proposes a discussion around architectures for dwelling and practice, an inclusive methodology that locates ways in which we begin to navigate the un-governability of all elements and potentially disruptive information associated with the maintenance of juxtaposing energies.

Interrogating the phenomenology of utopias solicits the inherent polemic: the fear that all things won’t fit to succeed in the imagined dominant path.

The room offers an expanded sight for the horizon, no longer obliged to rid oneself of the things that supposedly delay and suspend progress.

Taking to task the integration of each new entrance or person to the room as the thing itself, there exists a curiosity regarding how each thing fits.

Participants are invited to engage with accumulative labour, things to be worked and a culture of flexibility negotiated in the doing and undoing.

We will work with raw materials such as rope, chair, ladder, spices, fruit, fixtures, and skins.

There is a culture of care and an interest in continuous construction as it relates to world building: acts of labour engaging intimacy, sexuality and economies of exchange.

If we think of the collection of things in the room as resembling a familial network, amidst the fixing, shifting and flexibility of all parts, what is the risk, what is masked or lost? Who doesn’t fit into the family?

Simone Aughterlony is an independent artist based and supported in Zurich and Berlin, working predominantly in dance and performance contexts. Over more than decade, Simone she has been devising and producing choreographic works in collaboration with friends, visual artists, musicians, academics and dance artists.

She has collaborated with makers such as Meg Stuart/Damaged Goods, Forced Entertainment and Jorge León, Phil Hayes amongst others.

Together with filmmaker Jorge León, Simone conceived, curated and directed an artistic project on the subject of domestic service that premiered at the Kunstenfestivaldesarts Brussels (2010). In 2015, Jorge and Simone joined again to devise the project Uni * Form which premiered at Zuercher Theater Spektakel and is currently touring in Europe. In the same year, she was awarded the Swiss dance award for outstanding female performer.
Alongside this she has been touring Supernatural which is a collaboration with artists, Antonija Livingstone and Hahn Rowe as well as the The Biofiction Trilogy in it’s entirety. She is currently collaborating with Jen Rosenblit on the project, Everything Fits In The Room, a commission from HAU Hebbel am Ufer and Haus der Kulturen der Welt.

Simone has most recently been thinking about and engaging with alternative forms of kinship. Inside her process new constellations of family emerge as possibilities for reconfiguring a culture of togetherness that foster both familiar and unknown quantities. Finding affinity with temporalities that facilitate a sensitive and sensual rapport with the materiality of all bodies gives access to forms of intimacy we may not yet recognize. Her works playfully compose with representation and its saturation, seeping into and embracing the phenomenology of mis-recognition and the absurd. Simone approaches the performance genre as a world building practice where she navigates the contradiction between the domination of desire alongside the agency of all elements.

Application
Choreographic and/or dance knowledge is desirable. Workshop will be held in English. Workshop is free of charge.

Application deadline: Send your applications with short biography to agon@emanat.si until October 3rd.
Participation is limited in number, so we reserve the right of selection in the event of an excessive number of applications. 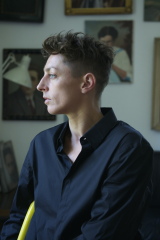