Barbara Kanc graduated from Trinity Laban Conservatoire of Music and Dance in London, Great Britain, after completing secondary level contemporary dance education at the pre-School Education and Grammar School Ljubljana. After graduation, Barbara took part in different performing art and visual-performative projects, internationally and in Slovenia, where she currently lives and works.
As a dancer and performer, she collaborated with Matjaž Farič, Marie-Gabrielle Rotie, Maja Delak, Mala Kline, Iztok Kovač, Katja Legin… Her work, however, was focused on performative/movement/sound installations, created in tandem with Metod Blejc, as well as with sound artist Rie Nakajima and photographer Marie Roux.
Since 2010, she is active as a pedagogue of creative dance and contemporary dance for children and youth. She mentors children in their dance performances and miniatures, which are presented at dance shows and at the dance competition for youth Opus. She taught at the Laško-Radeče Music School. Presently, she gives dance workshops for children at the Ljubljana Puppet Theatre, Španski borci Culture Centre, and occasionally at Škuc Gallery.
She is attentive to little, almost unnoticeable things and slow presence. In her work, she thus focuses on the presence or absence of these tiny, minute details. 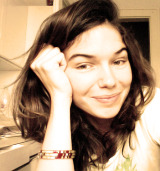