Igor Dobričić (NL/RS): Toward Dramaturgy of Movement; from scaffolding to scripting - Workshop

09.04.2009
Investigation in the emergence of the performative (dis)order

The workshop by Igor Dobričić will be based upon the concrete example, namely the analysis of the dramaturgical process of the project Sugar Rush, created and performed by Nina Fajdiga, Tina Valentan and Jasmina Križaj, in which Dobričić participates as a dramaturge. The practical part of the workshop presentation will host the dancers and the participating musicians Jernej Jurc and Tian Rotteveel.

Sugar Rush is a performance project that through the medium of dance and music aims to invoke unbearable sweetness of a shared community - a memory of a paradise that never really existed and yet it is forever lost.

Although in its initial intention it refers to the collection of imprecise and personal reminiscences of Yugoslavia, the country that was violently wiped from the map of Europe during the last decade of the 20th century, Sugar Rush is not seeking to make political or critical statement on the subject. Instead, three dancers/makers (each in its own way and all three of them together) are turning toward their own childhood nostalgia in an effort to purify it into an immediate sensation of irrational exhilaration directly accessible to the spectators, irrespective of their personal or national history.

Through their shameless “naivety” expressed as an unstoppable and obsessive desire to dance themselves out of time Tina, Nina and Jasmina are inviting us to reconsider the value of togetherness and shared enjoyment beyond personal memory or collective history even if that requires radical “suspension of disbelief”.

I really like it there because everything is perfect and great and extremely good. Everything is beautiful because we can be like this and like that and fat or we can also be skinny and we do not care. Why should we occupy ourselves with who we are and what we are? There is also a lot of sun there and the moon and the stars. Is there also night and day? And a light and a sea and bunnies? Are bunnies there as well? Because bunnies like to have sex. Do they reproduce themselves there? Yes, I think they do.

(a fragment from rehearsals)

I would like to problematize and destabilize representational relationship between movement and meaning assigned to it. I would than like to proceed by defining the function of dance dramaturgy as a process of constructing a scaffolding – supportive structure of temporary, “meaningful” explanations designed to facilitate intuitive ordering of a movement material.

The objective would be to shift production of meaning in relation to movement from being regarded as something fixed and authoritative toward becoming temporary technical assistance to the rehearsal process.

The main question is: if we destabilize authority of meaning, what remains of it once we start removing the scaffolding of a temporary explanations and performance structure emerge as a “pure” sequence of movement?

In an attempt to answer this question I would like to explore conditions under which performance structure emerges in a “public eye” - in a specific external context of its presentation / encounter with the audience.

My argument would be that meaning need to be understood not only as something temporarily constructed around the work so that inner process of creation could move forward, but also as something inscribed permanently upon the work by the external social, cultural and political circumstances of its production and public presentation.

I would like to demonstrate this argument by analyzing a role of a dramaturgy in a process of scripting (writing down) the work, both beforehand, as a general outline in a context of the subsidy proposal or publicity material and in retrospect, as a critical reflection upon the produced performance.

The objective would be to raise awareness for the precise relationship that exist between a meaning of the work and a social (cultural, political) context in which it is produced and presented.

Overall goal of the workshop is to analyze complexity of a meaning production in a dance performance both in its internal and external significations and to demonstrate a role of dramaturgy in managing both.

Following the workshop, participants should be able to make accurate distinction between:

• Precision of meaning production in relation to its external, social/cultural context in which the work is produced and presented (scripting)

Furthermore, participants should be able to demonstrate understanding for the role of a “dramaturgical eye” in the scaffolding and scripting of meaning, both in a situation when this demand collaboration with a dramaturge or when it is conducted by the choreographer him/herself.  Igor Dobricic

Igor Dobricic studied dramaturgy at the Academy of Dramatic Arts in Belgrade, (former) Yugoslavia, left the home country at the beginning of the Balkan wars and lived/worked for three years in Melbourne, Sydney and Brisbane - Australia than came back to Belgrade and started job of the dramaturge for the Belgrade International Theatre festival (BITEF). In 1995 he also embarked on an experimental performance work with the group of teenagers, creating, together with them and in a period of four years, small body of work. This work came to be of particular importance for him as it gave him an opportunity to systematically explore the parameters of performative action in-between the different fixed contexts (theatre and visual arts, professional and non-professional status, individual and group work, aesthetics and ethics, etc…) During 1998 he got involved, as a grantee, in an art project funded by the European Cultural Foundation (www.eurocult.org). In Summer of 1999 ECF offered him a position as a coordinator of the Arts programme and he decided to move to Holland. Almost in the same time he was admitted to the postgraduate course at the De Amsterdamse School/Advanced Research in Theatre and dance Studies (DasArts) www.dasarts.nl. During his study in DasArts he created a number of installations and solo performances mostly experimenting with the parameters of the performer/audience presence inside a specific space/ time context. Between 2005 and 2008, in his role of the programme officer for the arts, he curated and coordinated project platform for the ECF - ALMOSTREAL (www.almostreal.org). Simultaneously, he kept collaborating as a dramaturge with a number of choreographers/makers (Nicole Beutler, Keren Levi, Nora Heillman, Diego Gil, Katrina Brown, Martin Nachbar). From 2005 onwards, he also started teaching dramaturgy and concept development to students of choreography at the School for New Dance (SNDO). From January 2009 he will hold a research position with the Amsterdam School of the Arts, as a part of the Art Practice and Research group.

In collaboration with: SUGAR RUSH and Ljubljana Dance Theatre

Financial support: Ministry of Culture RS, Embassy of the Kingdom of the Netherlands 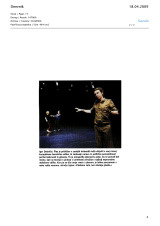 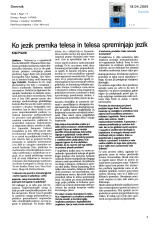 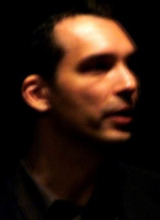